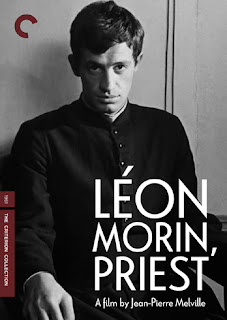 Jean-Paul Belmondo as a priest is enough to serve as the premise for countless movies. I might even go so far as to say Jean-Paul Belmondo being a priest is what every unrequited love story is ultimately about. Look at this fucking guy over here. I'm happily married (and straight) and even I couldn't resist him. Has anyone ever looked better in a frock? This whole thing just seems crazy right from the beginning.

Okay, now that I got the homoerotic portion of the post out of the way, let's talk about Léon Morin, Priest. Beyond Les Enfants Terribles , which was as much Cocteau's film as it was Melville's debut, this is the least "Melville" of all of his films in the collection; there are no gangsters, the moral does not rely upon justice or any code (beyond God's), and perhaps most importantly it is told from a woman's perspective. This is only disappointing because Melville's gangster films are so good - beyond that, the film holds up on its own.

Léon Morin, Priest is as much a star-centric film as Le Samourai: like Alain Delon, Belmondo towers over everyone else. Without his natural magnetism, the movie would be dead in the water. This presents an interesting quandary because his character is so unlikable. Belmondo is manipulative and teasing in the film, he uses the women in his town to claim his own moral superiority - there's more than a little bit of misogyny in his behavior. So as the viewer we are stuck between hating him for what he is doing and loving him because, well, he's Jean-Paul Belmondo. Emmanuelle Riva, for her part, does her best to give her character some spine, but she's not offered very much other than yearning.

As I'm working through my feelings on the film, I'm beginning to feel more negative toward it than I had initially. But the movie shouldn't necessarily be condemned for the dynamic it depicts, and what is actually up on screen feels very real. Occasionally, Belmondo seems to really love Riva, but it's really hard to tell how much of a game it all is to him. The fact that the film is set during the Nazi occupation (with Belmondo a clear sympathizer with the resistance) makes the portrayal of the characters much more complex. This is especially true when factoring in minor characters like the would-be rapist American soldier and the kind German one. The film becomes much more about the good and bad in humanity than a condemnation of any one character or group - which makes the film much more Christian than any theological discussion could warrant.
Posted by bza at 8:05 AM