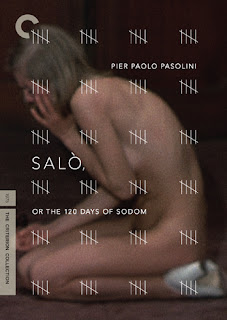 There is a truly harrowing moment in Salo, but it's not any of the moments often cited as difficult to watch. Unlike those scenes, it doesn't involve excrement, knives, or gruesome torture. Instead, a handful of victims is found to be in violation of the rules and, rather than deal with their inevitable punishment, they rat out other victims for breaking the rules. They do this even most likely fully aware that it will not save them, but in a last ditch attempt to have power over someone else in the way they themselves have already been dominated.

Salò is undoubtedly the most notorious film in the Criterion Collection, and arguably the most notorious film made by a serious filmmaker in the history of cinema. Watching the film is a rite of passage into that most daring (and insignificant) group of cineastes who are willing to go the extra mile to satisfy the urge to complete their cinematic education. It's also sought-out by viewers with a thirst for the extreme, those who would group it in with The Human Centipede and Cannibal Holocaust as a graphic ordeal that is unafraid to explore the limits of exploitation and extreme violence.

Though I understand the latter group, I generally reject the appeal of that sort of movie, so, apart from simply wanting to have a fully finished list of Criterion movies with no cheating, any desire I would have to see the film would stem from my allegiance to the former group. Either way, I think both groups would and should be dissatisfied with Salò. As a film, I don't think it's especially impressive, and as a piece of horror-slanted torture porn, it's rather awkward. Salò neither delivers a compelling political or cinematic case for its existence, nor treats its most disgusting and shocking moments with enough reckless abandon for horror fans to enjoy it. The lack of story, the disappointing way in which homosexuality is treated (especially infuriating since Pasolini himself was gay), and the thin line between the horrors of fascism being exposed and the thrill of fascism being glorified makes the film a somewhat meaningless viewing.

Still, the enormous reputation of the film, combined with my own long journey toward viewing it (or even being ready to view it) seems to demand an evaluation. Like so many visceral films, Salò must be evaluated on two separate levels: the experience of watching it, and what is actually on the screen. Pasolini's most beautiful shots (essentially all of which come in the first half of the film) can not conceal the emotional dread this beauty invokes simply because we know what's going to come next. Similarly, the repulsion that is unavoidable in what Pasolini so accurately dubs "the circle of shit" cannot be overlooked when attempting to place these moments in a political context. Without fully bisecting the two, I'd like to address them separately.

As an emotional experience, Salò will tell you a lot about your relationship with movies, specifically violent movies. Nearly 40 years on, the film has lost little of its power to repulse audiences, but the film is not nearly as shocking as it must have been at the time. If anything, Salò is a reminder of how low we've sunk - regardless of your opinion of the film, you have to assume Pasolini was saying something here, even if it was just to elicit some sort of response. The most violent movies today (e.g. Saw, Texas Chainsaw, the above-mentioned Human Centipede) are created for the passive viewer in hyper-aggressive ways. Salò, for better of worse, toys with your feelings. Movies today assume you have none, and are in it for the kicks. Would anything here truly be above being used almost exactly in a contemporary horror film geared at squirming teenagers and their dates? The final horrific torture scene, in which victims are tied to stakes with every limb, seems to have been transposed directly for use in The General's Daughter, a procedural crime film starring John Travolta which made over $100 million at the box office with hardly a peep from offended parties.

On a personal level, much of your ability to stomach the film will depend on how easy it is for you to separate what is on screen from the reality of the production. For some viewers, the fact that what is being done to these human beings is not real, that they did not suffer, and that the poop is most likely chocolate is no consolation, and those people really have no business watching the film. Without this ability, I can only imagine what seeing this movie would be like. And yet, with this ability, I fail to see the worth in seeing these things done. Am I supposed to be proud of myself for being able to stomach reenactments of the true horrors humanity can inflict on one another? Perhaps I am supposed to internalize the violence to ensure that I will treat real acts of a similar nature with more gravity? Neither self-congratulation nor humility seems worth the experience - one is an intellectual circle jerk, the other, preaching to the choir.

Technically, Salò is an extremely well-made film. Pasolini only made films for a decade and a half, but his chops were already on full view in Mamma Roma, and this film, made a decade later, shows his maturity and steady hand. His musical juxtapositions might come off as too obviously ironic, but the classical framing during the story telling and the near-documentary style of the opening sequence in which the victims are rounded up seems absolutely essential to presenting what comes afterwards with the necessary weight. Of course, some shots do seem entirely designed to disgust for the sake of being disgusting (a certain close up of an unappetizing dish being the most obvious), and moments like these reminded me of the wasted talents of directors like Gaspar Noe and often Michael Haneke. There is certainly a "sound and fury" effect to Pasolini's films when viewed from outside of the cultural context against which Pasolini believed he was raging (and which arguably did him in). Furthermore, the narrative is so simple, the characters so spare, and the philosophical discussions so haphazard, that any knowledge of where to put the camera becomes irrelevant pretty fast.

Beyond the actual process of watching the film, Pasolini's political take on the film seems to be dependent upon how seriously he intended to connect his fascist antagonists with his modern day "neo capitalist" targets, and whether the shots fired were intended to be directed specifically at them or were instead meant to be all-consuming. Fascism has become such an easy target that any rejection of its supporters feels like beating a dead horse, but even if Pasolini had used some other example it wouldn't have changed much - this isn't exactly a subtle film. But if the argument becomes whether or not Pasolini intended to express a counter-philosophy or simple nihilism, the film makes for a more interesting jumping off point.

Inevitably, that discussion must come back to that moment when victim turns on victim. This seems to me to be the heart of the film (if it can have a heart), and challenges the simplistic construct of the narrative to make a more complex point about humanity. But there is a second moment which demands evaluation: the pianist's suicide. This character, hardly noticed before her final moment, is the clearest stand-in for the viewer, not necessarily in their role as a viewer (after all, this position is taken much more clearly by the fascists as they sit with binoculars and view the torture below), but in their role in society, serving the powers that be as they stand by allowing evil to continue. From this perspective, her fate can be taken in two ways: surrendering to the inevitability of the evils she has just witnessed, or rebelling against that evil in the only way she could manage to assure they would no longer control her. I honestly can't say what Pasolini's intention was in this scene, but it does read to me as the most important scene in the film, and I am somewhat surprised it is not discussed more frequently when Salò is considered. Of course, it is quite possible Pasolini simply intended to show one more shitty thing, which leads us back to the great mystery of the film.

I've written a lot about Salò at this point, somewhat ironically despite the fact that I ultimately don't think the film is worth intense examination. Perhaps assuming many viewers would feel the same, Criterion has included more essays in this release than in any other release I can recall. None of these really changed my mind about the worth of viewing Salò, although Catherine Breillat's essay is a wild ride. I think the thing I will remember most about the experience of seeing this film is the impossibility of meeting expectations. No film is as horrifying as your imagination can make it seem, none is so explosive as its reputation (although House really is that weird). This renders shock cinema somewhat impotent. Removed from its notoriety, the fact that film is banned in multiple countries, has horrified numerous unsuspecting filmgoers, and maintains a reputation as the most daring and disturbing film ever made, Salò is a mean little movie that says a lot more about its creator than it does about society. You already know if you can stomach Salò or not, the question is, should you really even bother?
Posted by bza at 11:39 AM