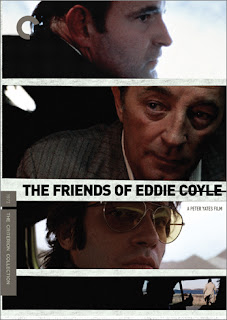 The Friends of Eddie Coyle is one of the great finds in Criterion's catalog. I first saw it when Criterion released it four or five years ago (it had never been available at home before) and was totally blown away that this film had slipped through the cracks. Along with being a great Boston movie, it also features one of Robert Mitchum's best performances and some great supporting actors to surround him. But the real elements that make this such a lost gem are Yates's direction and the intricately constructed and nuanced script. This type of unsparing crime drama set the stage for the best of the genre to come, including the greatest television show of all time, The Wire.

The film is combination of dense and perfectly toned conversations and intense, nail-biting suspense sequences. The script doesn't bother with exposition and bets instead on the viewer's willingness to keep up as best they can. The first time I watched the film I was somewhat lost for the first half hour or so, but quickly caught on to what I needed to know. Coming back to it, the plot is much simpler and it's easier to sit back and enjoy the dialog, particularly between Mitchum and his gun-runner both in the early coffee shop scene and the chilling bowling alley scene in which Mitchum threatens him more overtly. This script should be taught in schools - the dialog is that well-constructed. Interestingly, there have been comments to the effect that there were a healthy amount of scenes left out - though it would be interesting to see these moments, I have a hard time imagining what would be needed.

These editing decisions seem to me to be just another indication of how in control Yates is here. The director made the excellent Bullitt a decade before and would go on to make Breaking Away and a handful of other well-received movies, but he never really gained much recognition and his death a few years ago did not usher in the reappraisal his work deserves. This movie's bank robbery sequences are quite simply terrifying and as taut as can be. Yates avoids most of the dated techniques of the era and presents the sequences simply and with a cold eye, making for total uncertainty and realism. The movie is most successful as a human drama, which is of course its main intention, but the way Yates uses these moments to highlight the calculation and nature of these characters and the terror they force onto innocent people both underscores this drama and makes for riveting suspense.

The Friends of Eddie Coyle has a huge following, as illustrated by the passionate comments on Criterion's essay page. Part of this following comes from a regional pride that I know all too well living in Massachusetts, but much more of it come from the film's combination of suspenseful direction and dense plotting that rewards multiple viewings and the effort it takes to unravel the various dynamics. It's also a remarkable look at mid-level crooks and their very real struggles to reconcile their careers with their identities. Mitchum's tragic Coyle is a man playing at one thing or another, but whether it's gangster, loyal father and husband, honorable crook, or scheming snitch he's not sure. It is always clear that the film's sympathy for him will not save him from his inevitable fate, and even if it is surprising how it came to be, the cards were dealt long before the film began.
Posted by bza at 9:18 AM