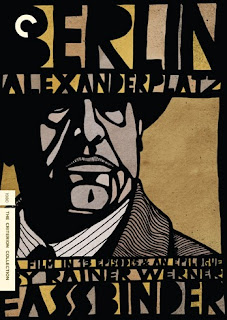 Episode 1: Oh, Jesus, this could be a long trip. We're only 2 hours in and I already know I have to watch 13 more hours of a man who raped one woman (who subsequently decided she liked it like apparently happens in quite a few movies) and murder another by beating her to death with his bare hands. This is the protagonist of a 15-and-a-half hour movie.

Episode 2: It's clear now that this is really more of a season of, say, an HBO show, as the story has a nice arc in this episode similar to the previous one. So I guess really Franz is not so different from Tony Soprano, and he does want to go clean. Obviously it's not Fassbinder's intention to glorify what his character has done - and I doubt all of this is going to end very well for Franz - but this sort of thing is a lot easier in a book (or even a regular-length movie) than in a massive epic which revolves around one protagonist.

Episode 3: I had very little idea what the hell was going on in this episode. In fact, I had to go to Wikipedia to read the synopsis to make sure I had gotten the necessary info - turns out I had understood the broad strokes, it just seemed like there was a lot more going on under the surface than there really was. The whole interaction with the woman in her house was very strange - I couldn't quite understand if he had indeed had sex with her or made it up or what. And then when leaves at the end it seemed like he was making a bigger deal out of it than it was. That other guy was a real sleazeball, though.

Episode 4: What the fuck. This was dull as shit. I'm starting to get really worried that I have to watch ten more hours of this. How is this an hour long?

Episode 5: Lina appears to be gone, which is odd, but this episode was loads better than the previous one - in fact, it might be my favorite up to this point. The story is kind of strange and a little unbelievable - who is to say all these women are going to be attracted to both of these men anyway? Actually, why are they attracted to either one of them at all for that matter? Do women have extremely slim pickings in pre-WWII Germany? Still, it's nice to have an actual plot after the last episode, and I enjoyed Franz's arc and the way he handled everything, even if he is still pretty damn unlikable. I'm six hours into this thing and I have yet to really see why this needs to be so long or what people see in it. It's so intently focused on this guy who is totally nowhere that I wonder if I'm just missing a lot by not knowing much about German history between the World Wars. So far there have been some Nazi references (along with a reference to this guy - I think at the end of episode 4 - who I had never heard of before and I find pretty interesting), but nothing that really stands out.

Episode 6: We seem to be getting into a little more plot here, and it looks like Franz will be heading back into crime if I'm not mistaken. His inadvertent association with a robbery all seemed a little too ridiculous to be entirely behind his back, but I do think he is still trying to stay clean. I will also mention that I had a bit of the same reaction to this episode that I had to episode 3, which was that I was pretty sure I wasn't following what was going on, but looking back I got all the essentials. This is certainly a very dense work that is a reflection of its source materials and its ambition - I just wonder if the surface story is appealing enough to convince most people to take a second and third 16 hour journey.

Episode 7: This felt like a transition episode. Franz has lost an arm, yeah, but all that really means is he'll be slightly fatter on his right side for the rest of the series. Really, this feels like the turning point where Franz tries to hold off from descending back into his previous lifestyle and eventually succumbs in the good old red light district, which is rendered here as a kind of Pirates of the Caribbean meets Douglas Sirk aesthetic (only, you know, more prostitutes). I'm more intrigued than I have been at the end of previous episodes, but I'm not on board yet.

Episode 8: I hate this. Seriously, what am I doing with my life? Why did I watch this? Can someone tell me what happened in this episode that makes it need to exist? Why does anyone like this movie? What is happening?

Episode 10: So this one was at least moderately interesting. The dynamic between Franz and Mieze is getting more complex, and the way he handles her new long-term client is engaging and somewhat suspenseful knowing what we know about his ability to inflict damage on his women. But I have a hard time believing anyone would think episodes 8-10 (and I suspect 11, too, since this didn't really end with a clean cut) wouldn't be better condensed into one hour - perhaps even less. It's been a long Criterion journey to get to this film, but through 450-some posts I never once suspected that most people who liked a movie did so out of obligation or pretense. But I am honestly at a loss to explain why this film is so well-liked, or really why anyone would like it. When compared to other Fassbinder, it feels lazy and largely incomplete. I'm certainly going to reserve my final judgement until after the notorious epilogue, but at this point I'm not convinced anything can be worth the hours I've spent on this.

Episode 11: Somewhat better than what's come before in that things actually happened, but the big climactic scene was so horrific and awful to watch that I hate to praise it any more than previous episodes. Perhaps following a character like Franz in a book can be bearable, but once you've seen the things his character does to women, it's hard to care at all about the minutiae of his life. This was also the episode where the homoerotic undertones of Reinhold's and Franz's relationship became most apparent. This is still quite the chore.

Episode 12: The second half of this episode, in which Mieze and Reinold walk through the woods, culminating with her murder, is superb filmmaking of the highest order. It also makes absolutely no sense as a television program in the early 1980s, when broadcast technology must have rendered some of the shots virtually indecipherable. It's the best indication yet of just how poorly this must have come across on the small screen before HD and screen sizes that went beyond 30 inches. I wouldn't say the last 12 hours before this were worth it, but I am glad I watched this scene. Still, the characters' motivations are so unbelievable - I really have a hard time understanding how Mieze could have been so stupid as to think she could use Reinold to get information without him wanting something in return, and I don't understand why she would be attracted to Franz in the first place. Most of the interactions in this movie remain a bit of a mystery to me.

Episode 13: Most of this episode could be cut - I would say this could have easily been five-ten minutes of a typical film. Very little is gained by the increased running time except for more opportunities to have Franz say Mieze is dead over and over. This is a pretty disappointing way to end a 14 hour movie, but it's also quite indicative of the film as a whole - overlong, totally self-indulgent, and depressing in an insignificant way. I've heard a lot of interesting things about the epilogue, so I'm not completely checked out at this point. But I am thankful to have most of this ordeal over and done with. I've started reading just about everything on this film I can find online, and this article most closely approximates my own feelings at this point, both in its headline and its full text. I would love to talk to someone who found this film engrossing, or even worth seeing.

Epilogue: Um. OOOOOOOOOOOOkay. I'm not sure this could have been more German if they had tried. I had no idea what to expect going into this, but it was certainly just as weird as people said it would be. There were definitely some cool parts, especially as it related to pop music. But most of it is pretty indecipherable, and just as overstuffed with ideas as the previous fourteen hours were overkill.

Honestly, I don't get the appeal of this movie. I'm really hoping someone can help me out here. Why does anyone think this approaches Fassbinder's finest work (The Marriage of Maria Braun, World on a Wire, or Ali: Fear Eats the Soul), let alone surpasses them? It's just so long. So very very long, and unnecessarily so. And the idea that anyone would spend 16 hours with this unlikable, unappealing character is a total mystery to me. Has anyone ever watched this a second time? How can that be possible? That is nearly a full day of your life that you never get back.

The way women were treated in the film also really bothered me. I'm not necessarily calling the film itself sexist or misogynistic, but these moments just felt excessive and depressing. I like a lot of Fassbinder, I really do, but I'm just at a loss here. Obviously, at fifteen hours, it's not a film I'll be giving another shot, but I would like to come out of it with a greater understanding of what people see in it. I just don't have that yet. In fact, this is the first time in over six hundred and fifty titles that I've thought to myself "Do people just like this movie to say that they like it?" This is a question that typically repulses me, but here we are.