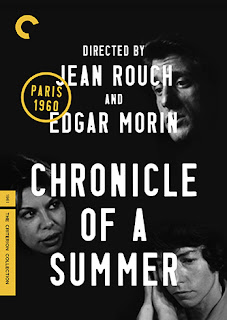 I feel asleep on two separate occasions while watching Chronicle of a Summer. This doesn't mean it's a bad movie or I didn't like it (I have a one-year-old, so late nights are anything past 10), but I bring it up because I expected to be totally enraptured with this movie, and was quite surprised when it ended up causing me to drift off. Part of this was the pacing, but a lot of the problem was simply that the people in it were not as interesting as I expected them to be.

There were still a few moments that kind of blew my mind. The first happened towards the beginning of the film when an old man is interviewed. He tells us that he was born in '82, the same year I was born - only 100 years earlier in 1882. This of course immediately made me think about the fact that I will be 78 in 2060 - if I live that long!

The second moment occurred later during a conversation that was initially about race. It was a somewhat uncomfortable conversation, both for the viewer and the people having it, and it was a reminder that while racial politics have changed enormously in the last half-century (something that's quite obvious in the conversation), this  awkwardness when addressing the topic has not diminished much. However, partway into the conversation the facilitator asked two of the men if they knew what the numbers on one of the women's arm referred to. Here was a woman who was probably around my age who had survived the Holocaust! In a lifetime of watching movies, I don't think the proximity of that most horrifying of events to my own time had ever seemed more real to me. It made me immediately recontextualize all of the films I had seen about the Holocaust from the 50s and 60s. Works like Night and Fog, The Two of Us, and The Shop on Main Street were connected to real people who went to see them, people my age who couldn't look at them as works addressing a generic "history" but as works speaking to their own histories. It's not a thought that is easily reconcilable with an innocent view of the world, and it's impossible for me to understand what it would be like to have to shape a world in which that was your introduction to what humans are capable of.

Both of these moments were, of course, unintentional. But they affected me much more than anything the film did with purpose. This is an inevitable product of a documentary, and it's not even an undesirable one - in fact, it might be the most powerful thing about the format. But without a sense of purpose that feels inspired and impressive, the movie felt a little flat to me, like they were stumbling in the dark and occasionally hitting something worthwhile. It makes for an interesting viewing, but not necessarily a memorable one.
Posted by bza at 1:27 PM