#495: The Golden Age of Television 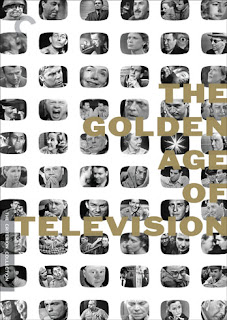 It's nice to know as I come to the final five films that have been released by Criterion up to this point that there are still major surprises to be had. The Golden Age of Television is certainly one of those - a great boxset that makes a powerful case for its grandiose title. The whole set is brilliant and powerful stuff, both in what's on screen and the context surrounding it. We wouldn't even have these remarkable stagings if it wasn't for kinescopes, essentially films taken of a monitor showing the broadcast in action, since these live performances were not shot on film and were simply broadcast over the air to affiliates all over the country. With only a couple of networks at the time, virtually everyone in America was watching these, making them the cultural equivalent of a super bowl every night.

Of course, unlike the super bowl and most universally watched shows these days, all of the episodes that make up The Golden Age of Television were fictional, essentially plays put on television and written by major talents, the most notable of which was Rod Serling, most famous for creating and writing most of The Twilight Zone and still one of the great television writers in history. Serling wrote three of the eight teleplays that make up this set, and they are probably my three favorites (though Marty, written by another great, Paddy Chayefsky, is also spectacular). Patterns, Requiem for a Heavyweight, and The Comedian all take on major cultural institutions of the 1950s (big business, boxing, and television, respectively) and have no problem tearing them down and forcing the viewer to question their mindless consumption and acceptance of each. But they are most impressive for their vivid characters, the way he manages to make even the most heartless person in each a three-dimensional person with believable and even somewhat sympathetic motivations. Serling also benefited - as did the other writers in this set - from a group of memorable and at times brilliant performances, particularly from Jack Palance, who is heartbreaking in Requiem, and Mickey Rooney, who is a bit of a revelation for me in The Comedian.

Still, it is hard to believe that this was mainstream art in the 1950s, especially when you add The Days of Wine and Roses, a pitch-black story about alcoholism that pulls few punches, to Serling's three. There are sexual elements and subversive themes in many of them; most obviously Patterns runs so counter to what we perceive of today as 1950s American values that it's hard to believe that the teleplay was so popular that they actually "reran" the performance a year later by getting everyone back together and putting on another show (fortunately, the performance included here is the original).

The other three telecasts included here, The Wind from the South, Bang the Drum Slowly, and No Time for Sergeants, were still very good, but fail to transcend their time. The Wind from the South is a beautiful romance story, but tilts toward the era's melodrama a bit too much to maintain its freshness. Similarly, No Time for Sergeants is hopelessly dated now, even if there are bits and pieces that stay funny. Comedy is a difficult genre for aging, especially on TV, and Andy Griffifth's "aw shucks" routine has seen better days, even if he was clearly an influence on Kenneth the page from 30 Rock. Bang the Drum Slowly is another melodrama, made more interesting by the inclusion of a young Paul Newman, but the film just doesn't have the same crackle of energy Serling's work does.

Overall, this is a spectacular box that makes a strong case for its title (even if I do think the golden age of television is really the last decade or so). Like so many box sets from Criterion, this is an historical document of invaluable relevance in both television history and film history (many of these plays went on to be filmed, while cast members, directors, and writers also went on to big-screen careers). I can't really recommend it highly enough.
Posted by bza at 7:46 AM