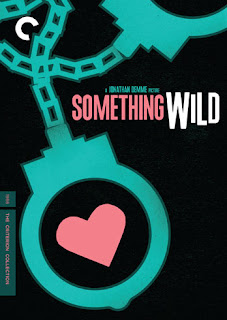 Something Wild belongs to the quirky 80s of Peggy Sue Got Married and Pee-Wee's Big Adventure, a decade that ran ironically parallel to the overblown, overcoked 80s of Lethal Weapon and Die Hard. A unique combination of a romantic comedy and a suspense thriller, Demme's film was made in the only decade it could have been, where genres could intermingle and screenwriters and directors could shift tones without alienating the audience. Quite frankly, Something Wild does not get made today.

The film begins with Jeff Daniels quietly sneaking out on a check, a move which is picked up on by Melanie Grffith, playing a somewhat generic "wild lady." She quickly and casually kidnaps him, taking him on a whirlwind journey that includes a motel room sex sequence, robbing a liquor store, and, naturally, meeting her mother and attending her high school reunion. Once they leave the high school reunion, however, things become notably darker when Ray Liotta shows up, unwilling to let Griffith, to whom he is still technically married, get away.

There are all kinds of issues in the film that would be drafted away by the modern studio executive, many of them rightfully so. Both characters are extremely unlikable initially, and many people wouldn't have the patience to sit through the film to find out the revelations about the characters which make them more sympathetic and real. It's largely unclear why Griffith would be attracted to Daniels, and totally unclear why she wants to go to her high school reunion with him (especially since she knows Liotta might be there). Finally, the climactic scene in Daniels's house is so out of place in what is essentially marketed as an offbeat romantic comedy that, were it included today, theatergoers would revolt.

Yet the movie works. It's not at all a great film, and all of the issues above are very real and legitimate, but Daniels has a puppy dog innocence that is charming and makes you root for him, and Demme uses his considerable skills to make the film brisk when it needs to be and to build the tension as it careens towards its finale. While Something Wild will certainly not be for everyone, it's a reminder that cinematic rules have cycles, that not everyone wants to see movies that play by these rules, and most certainly that the 80s were the last time when such films were able to successfully thrive in Hollywood.

Ironically, many of the executives now running Hollywood grew up on 80s films, and are constantly looking for projects that recall their favorite movies of their youth. The pull between these honest desires and the dishonest necessities of making multi-million dollar movies in an era when fewer and fewer people are going to the movies is undoubtedly a constant struggle, but one which financial considerations will (understandably) win every time. Films like Something Wild are the casualty of this victory, one which most people won't give a second thought. But for viewers who appreciate films that challenge genre perceptions and introduce something offbeat, even personal, into the conventional Hollywood structure, the golden days are over.
Posted by bza at 8:28 AM