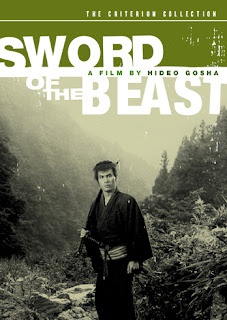 Sword of the Beast is part of Criterion's Rebel Samurai boxset, which also features Kobayashi's masterful Samurai Rebellion. While this movie isn't as impressive as that film, Hideo Gosha nevertheless manages to successfully incorporate anti-establishment themes that dwell on power and personal integrity into an otherwise conventional Western-influenced tale of the lone ranger. Gennosuke is a lowly swordsman in clan, intent on reforming its ways, when he is tricked into killing a minister by his superior. Refusing to sacrifice himself, he sets off to escape, not yet even able to grasp the fact that he no longer has a home. His journey of redemption takes a typical path for the era, but the film has enough appealing twists and entertaining showdowns that the plot becomes just as enjoyable as the themes explored in the film. Like Samurai Rebellion, Sword of the Beast is more samurai film than counter-culture expose. It uses anti-establishment themes because they were the dominant themes of the time, but ultimately its purpose is the same as a film like The Hidden Fortress, whereas a film such as Harakiri is less a samurai picture than a deep exploration of very contemporary issues.

The funny thing about the reformation of the Western/Samurai film - this most traditional of traditional genres, the home of John Wayne and the American dream on one side, Toshiro Mifune and the Japanese honor code on the other - was that the genre fit so easily into its new role, depicting tortured protagonists, splashed with shades of gray. The very same tools used to build up the mirror-image genres - individual achievement in the service of heroic glory, naturalism as a vehicle for mythmaking, archetypal characters that provided relatability - were just as quickly used to tear down the tenets those genres held dear. Now individuals were bucking the system to retain their own integrity, nature was being plundered at the expense of an all-too-real violence that threatened its very existence (think the gold digging here, cutting into the Earth, or most apparently the opening of The Wild Bunch, where a scorpion is carelessly tortured by children), and those same archetypes were being tossed on their head. Hookers don't have a heart of gold in Sword of the Beast, they strangle men to death. The (all but) death of the Western in the 1960s was perhaps the most significant development in American cinema that decade, and the samurai film - though not as permanently killed - suffered a similar fate at the hands of a generation intent on tearing down the system that came before them.

Sword of the Beast represents a worthy installment in this deconstruction because of the protagonist's inability to succumb to his lowly fate. The title inevitably offers up the question of whether Gennosuke was a beast even before he left his clan as an outlaw, and the movie seems to be his attempt to struggle with this dilemma. Regardless of the answer, Sword of the Beast is another highly entertaining samurai entry in the collection.
Posted by bza at 1:08 PM