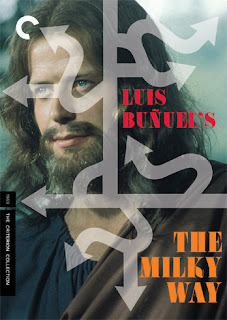 Another meandering exploration of religion that wanders through absurdity, satire, and various moments of heresy, Luis Buñuel's The Milky Way had basically the same impact his previous films dealing with similar issues had on me. Not much.

Yeah, it's funny when a reflective and seemingly intelligent priest turns out to be an escaped mental patient. And I honestly lol'd when Mary told Jesus not to shave his beard. But I actually had a hard time even finishing The Milky Way. The whole film felt like a weird amalgamation of Buñuel's typical thematic and psychological concerns and a weird facsimile of the counterculture movement which surrounded its release. It also struck me as unfocused, the kind of film only a great director can make because anyone else would have been told "no." Reading the essays on the film didn't get me much further, and while I wouldn't say I've loved any Buñuel film I've watched so far, this if the first one I fail to see a real case for being included in the Collection. It's not that I hated it, it just felt slight, and I've yet to see a good case made for why I am wrong.
Posted by bza at 1:22 PM