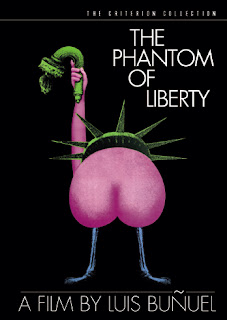 Knowing his penchant for playfulness and absurdity, it's no surprise Buñuel followed up his international hit The Discreet Charm of the Bourgeosie with this film, his most anarchic. Conceived from the initial seed idea of leaving a story just as it is getting interesting, The Phantom of Liberty is essentially a sketch comedy film, closer in spirit to Monty Python than Viridiana.

Like any episodic movie, some segments are more effective than others, and the comparison is inevitable. But there are far more hits than misses here, starting with the rebels being executed for not wanting to be liberated and peaking with two sequences: the little girl who goes missing but is actually standing right next to her parents and the much-discussed scene in which dinner guests go to the bathroom at the table but eat in a private dining room.

The Phantom of Liberty was made only because Buñuel himself had the most liberty he had ever had after the success of Bourgeoisie. He chose to use it to explore the entire concept of freedom, and the end result is something no other director could have made, both because no one could have thought of sequences like the man being whipped by a dominatrix in front of monks, but also because no one would have had the creative capital to spend in order to make that dream a reality. This is what makes films like The Phantom of Liberty so satisfying, and it makes me appreciate Buñuel's earlier films more, because without them, we wouldn't have a dirty old man giving little girls at the playground pictures of famous monuments.

On a personal note, this is the 200th film I've watched for this project. Over the past 15 months, I have seen more great movies than I could have imagined. I am pleased both by the number of spectacular entries in the collection and by my own ability to stick to this and see it through (which was inevitably helped by the former). Excepting future announced releases for the moment, I am at about the halfway point, since I had already seen about 150 of the films in the collection (give or take). I don't know how long it will take me to finish the rest (the recent Hulu deal should help me immensely) but I feel very confident that I will actually be able to pull this off. I hope anyone reading this has been encouraged to seek out some of these films, and I would love to hear your thoughts on whichever film strikes your fancy. This blog is by no means meant to be the last word on any of these movies, but is instead meant as a jumping off point for my thoughts and, hopefully, for you own, so I welcome any and all comments to open up a dialog about a film, whether I loved it or (even better) didn't get it. Hopefully together we can see this thing through!
Posted by bza at 9:14 AM