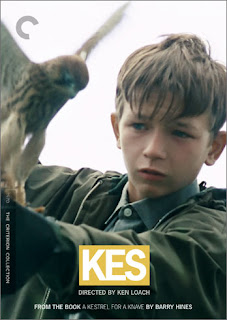 First of all, this.

OK, now that I've gotten that out of the way, I can move on to the 25-30% of this movie I understood. Kes is, as far as I know, the first film in a uniquely British film genre: inhabitant of a small working class, one industry town is able to get away from the drudgery and negativity of their surroundings through an unusual hobby/event/friendship. In most of these movies, including Kes, the inhabitant is a child. One of the first films I watched for this project was a tangential entry in this genre, but most are much more conventional, with arthouse sensations like Billy Elliot and The Full Monty leading the way.

Partially because it's the original, Kes is much more groundbreaking than its descendants. But the movie has a lot more to offer, including a superb performance by the lead actor, one of the most natural from any child performer in the series - and there are a lot of them. (Criterion loves coming of age stories, to the point where I have considered making it a genre label. I probably should, actually. There. I did it.) There are some really beautiful, heart-breaking scenes, like the one where the young boy presents to the class about falconry and take charge of his situation for the first time in his life, or where he talks about working to one of his teachers who is trying to reach out to him.

Along with the difficulty I had understanding the actors (I watched the film on Netflix, so no subtitles), I didn't really understand why the soccer sequence had to be so long, to the point where they even put the score of the game on the bottom of the screen as if it was on television. I also had a hard time dealing with the ending, which is extremely depressing in the way few of the film's descendants are. Kes was recently named one of the ten best British movies ever made in a big poll by the Guardian, and consistently appears on similar lists. While I can see its importance in British film history (and I haven't even mentioned that it is the breakthrough film by heralded director Ken Loach), the film doesn't reach classic level for me, and I think the build up may have been too much for such a small, intimate movie.

One last note: as with countless other films in the collection, it's a real gift to film lovers that Criterion has chosen Kes for inclusion. The version I watched on Netflix is in terrible shape, and cleaned up the movie will bring this unique era of British history to life.
Posted by bza at 9:25 AM