#102: The Discreet Charm of the Bourgeoisie 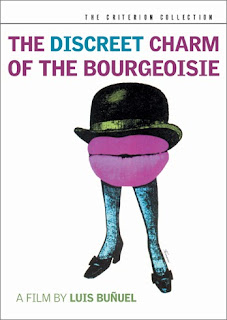 Finally! After a fairly uninspired journey through Buñuel's catalog, I've at long last arrived at a masterpiece. I always hate to agree with the Academy Awards, but The Discreet Charm of the Bourgeoisie is a great film, and worthy of its win for Best Foreign Film of 1972 (although technically I don't agree with the statement, as Solaris was also released that year, but not submitted by the USSR). The film doesn't do anything significantly different from Buñuel's previous work, it just all comes together in a supremely entertaining fashion.

The basic concept of the movie is easily compared to The Exterminating Angel. Both films are about "respectable" members of society who attend a dinner party, but the earlier film prevents the attendees from leaving said party, while the hapless inhabitants of The Discreet Charm of the Bourgeoisie can never even get started. Every plan for dinner, every moment before taking a bite, even most moments involving sexual release, is interrupted for increasingly ridiculous and surreal reasons.

Despite this obvious comparison, the film of which I was most reminded was A Woman Is a Woman, which I watched (and loved) early in this project. Both films are completely unconcerned with the illusions of filmmaking, and would much prefer to dialogue with the viewer. At one point in Buñuel's film, a man named Sénéchal wakes up from a dream which we had previously thought was reality. Later on in the film, another moment turns out to be a dream from which someone else wakes up. "I was dreaming," the man says, "No, wait, I was dreaming that Sénéchal was dreaming and woke up, and then I was dreaming." Elsewhere, at keys moments where a character reveals something crucial, a plane conveniently flies overhead and we are kept in the dark.

Buñuel unsurprisingly tosses in some digs at the Catholic church, with a bishop who gets off on tending to a wealthy couple's garden, but these moments seem much more light-hearted than preachy. This is probably because everything here is so over the top that even as he depicts these horrible people in their horrible bourgeois lives you can't help but be sucked in by the sheer glee he is taking in skewering it all. There's simply no time to be weighed down by Buñuel's hang ups and heavy-handed politics. Which is most likely why such a politically aware film and relevant social commentary can be so easily tied to what is probably Godard's slightest work of the 60s and 70s, instead of to a film like Pierrot Le Fou, which is more relevant thematically.

Interestingly, the comparison between Godard and Buñuel can be extended beyond these two films fairly easily. According to some people (I haven't seen a direct quote), Buñuel was heavily influenced by Godard's political films while making The Discreet Charm of the Bourgeoisie and its surrounding films. Like Godard, Buñuel never made a film carelessly, and always had his overall thematic concerns in mind. This was primarily because both directors were so self-obsessed as to be constantly reflecting their own psychological wounds and personal dreams on the big screen (which is probably what made them both great artists). But they were also highly political filmmakers, in both their thematic and structural concerns. Most of the time, this dates their movies and hurts the long-term broad impact of movies like Viridiana and Tout Va Bien. But when they hit upon a specific and timeless theme (like in Contempt) or go broad enough (like in The Discreet Charm of the Bourgeoisie) the results can be more illuminating than just about any other director could produce.
Posted by bza at 10:36 AM