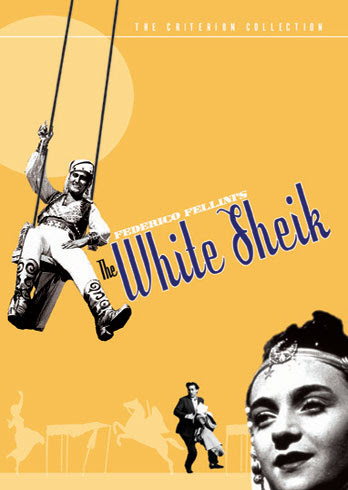 The White Sheik is the first film directed entirely by Federico Fellini, and it has most of his themes already intact: small town/big city, entertainment and entertainers, love vs. loyalty, etc. As was the case with La Strada, The White Sheik is in love with movies, especially silent films. The movie vaguely references Sunrise, but the plot here could have easily been a silent film of its own, as most of the dialogue is unnecessary for conveying the actions and emotions of the characters. However, unlike Amarcord, The White Sheik is very much about something, and takes place over the course of a specific day and has a simple but clearly delineated plot.

A newlywed couple arrives in Rome for a honeymoon where the husband has a long schedule prepared, but the wife deserts him to meet her secret idol, the star of a photographic romance series named the White Sheik. The film the essay in the Criterion releases references is Nurse Betty, but I actually think the better comparison is to Kiss Me, Stupid, the late-era Billy Wilder comedy. That movie was kind of the reverse of this one, in that famous people come to a small town, but the difference in mores in both the era and place that film was made is extremely large. Most of The White Sheik is taken up with both man and woman being obsessed with their honor, and Fellini pokes fun at them just as often as he shows he is sensitive to their concerns. I think it would be easy for the viewer to think the film is rather condescending to small town denizens, but Fellini - himself from a small town, and a director who would go on to make I Vitelloni and Amarcord, two very different odes to the village - is much more interested in poking fun at assumptions and airs than people. Certainly the Sheik himself is not spared a large deal of ridicule by the end of the film, so no one is really safe here.

I didn't particularly love The White Sheik, but then again I have an uneven track record with silent comedies, so it's not really surprising. The one thing that a film history fan will certainly take away form the movie, however, is once again how indebted the major arthouse directors of the 50s and 60s were to classic Hollywood, and how totally devoted to entertaining their audiences they were. It's so easy for people today to dismiss most of the Criterion Collection as movies meant for art-minded people to be challenged and provoked. But really there is no difference - when looking at intention - between this film and a movie like Nurse Betty.
Posted by bza at 8:59 AM