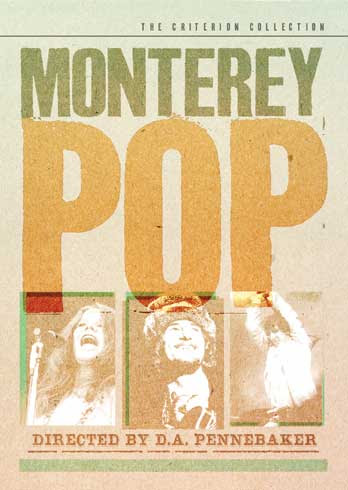 Honestly, it's a little embarrassing I waited this long to see this. Monterey Pop  combines two of my favorite things: Otis Redding and the Criterion Collection. You know of my love for the latter, but Redding is probably (definitely) my favorite singer of all time. His In Person at the Whiskey a Go Go is also probably my favorite record ever. The Monterey Pop Festival was the moment when Redding crossed over into mainstream success, and the same is also true of Jimi Hendrix. Both artists have standalone performances in the second half of this release (more on those in a different post), but they are also included here, in the main film. Redding in particular gives a stellar performance that is also shot beautifully by Pennebaker and his crew.

But the rest of the movie is equally awesome, and the whole work is most likely the best concert film I've ever seen, supplanting other greats like Stop Making Sense and Woodstock (which owes a great deal to this earlier film). There are great performances here from the Mamas and the Papas, Ravi Shankar, and especially Janis Joplin, who basically steals the show. Some of the lesser-known artists are great, too, especially Hugh Masekela, who is now very much on my radar for forward-thinking African jazz in the 60s and 70s. Overall, the film feels complete and compelling, a document of both the feel of the festival and the performances themselves, with the proper balance of tilting towards the latter. It's a great time, and an invaluable film that is thankfully perfectly preserved here.
Posted by bza at 1:50 PM