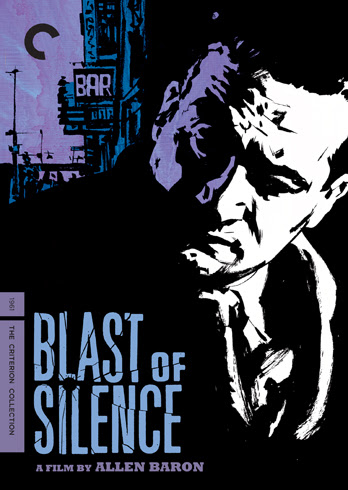 Before Criterion released it, this movie was little known outside of film nerds who specialized in either New York, noir, or independent filmmaking. It is an exceptional depiction of all three. Watching this and The Naked City so close to each other was extremely enjoyable, and a great way to watch New York breathe on film in two different eras. The fact that both are noirs shouldn't be surprising: films that demand a sense of the place and therefore shoot on location are often crime based.

But unlike The Naked City, which told a basically conventional murder mystery story and argued that it was just one of the 8 million stories in New York, Blast of Silence is getting at something much darker - maybe there's only one story out there in the naked city: destruction, alienation, death. The movie's story is so simple yet executed in such a striking way that it feels as if you are hearing the story of a hitman for the first time.

The movie is far from perfect. The acting could use a few more pros (Baron wrote, directed, and starred in the film). Baron's character occasionally falls into what I like to call the James Dean school of acting, flailing about at the inner turmoil tearing him apart. Certainly the low production value shows. But the score is pure fun, the direction is interesting without being overly flashy, and the film's boiled down noir sensibility gets to you. Like some of the lesser noirs (Detour comes to mind), Blast of Silence almost seems more in line with the genre's philosophy than, say, The Postman Always Rings Twice. It's a grittiness that doesn't just come from the characters' natures or the film's abstract and ominous lighting. Add on the fact that the first murder in the film is truly harrowing, the kind of messy, violent sequence that couldn't have been made ten or fifteen years earlier when noir was in full swing.

The last thought I had during this movie was what would it have been like without the narration. This isn't to say the narration is bad. It's actually one of the best things about the movie. But the movie could have been made without, and might have been that much more revolutionary. Can we watch a man stand on a boat, sit in a car, follow someone down a road, all the time knowing this is the process for killing someone? It may have made the procedure, the unintroduced protagonist, and finally the deed itself more horrifying, simply because unknown evil is much more powerful than a conflicted, damaged man.
Posted by bza at 8:19 PM