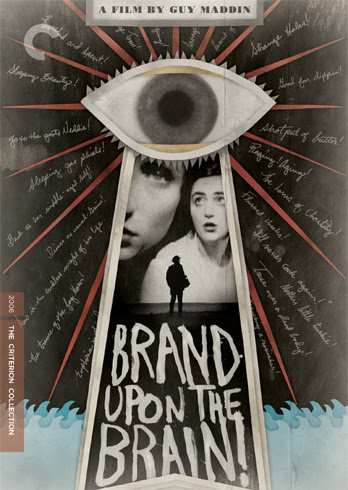 Let's try this again. Brand Upon the Brain was the first movie I've seen during this project that I had the opportunity to watch on the big screen. I'm thankful for that, because I might not have made it through this challenging and unique film on DVD. On the big screen, the film is absorbing and unique, a true assault on the sense that might be more easily compared to commercials or a Michael Bay film than a film by David Lynch or other filmmakers that play on the edge of narrative film.

I enjoyed a number of things about the film, especially the tone, which melds dark suspense and off-kilter humor with a mad scientist's glee. But the thing I like most about Brand Upon the Brain is the fact that Guy Maddin is totally invested in his material. The movie could so easily come off as pretentious and campy, a kind of weird joke on the audience. But instead, it feels passionate and personal. It seems like its the only movie Maddin could have made at that point in his life.

To be sure, this is a weird, weird movie. It's unlike anything you've ever seen before. Most people are going to hate it (which is not to say that most people don't like new things, but rather that most people will think this new thing is better left undiscovered). But for some people, especially people who love cinema and have a rich sense of its history, this movie will be a unique experience that is certainly worth viewing.
Posted by bza at 8:05 PM