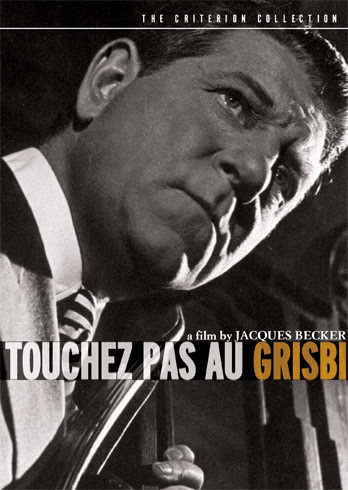 I thought I was being insightful when I realized halfway through Touchez Pau Au Grisbi, Jacques Becker's extremely enjoyable and nearly classic noir, that the film echoed a similar near masterpiece, Melville's Bob Le Flambeur. But, alas, Roger Ebert's great movies essay on the film is largely dedicated to the clear similarities between these two movies which center around an older man, highly respected in the underworld, nearing the end of his criminal career and succumbing to his weaknesses. Perhaps I'll get a little more credit for the comparison to one scene in the film and what I take as a direct lift in Fargo? Check the scene in which two cars encounter each other and the passengers of one car gets mowed down. A fat man runs from the gunman, only to be shot in the back and fall to the ground with a thud as he is running away. Surely Joel and Ethan Coen saw this scene and took notes.

Touchez Pas Au Grisbi doesn't 100% work for me, and there's one glaring reason why. I simply didn't buy Max's relationship with his friend, and didn't feel it had been established enough. So when Max risks his entire future in order to save his friend, I was kind of like wtf. I will say one thing about the movie though. Unlike many French noirs, this one doesn't feel like it has any connection to the American films that came before it. Max doesn't feel like a Bogart rip of, he feels like a Frenchman. I like that, but more as a curiosity than as something that defines the film. As a viewing experience, the movie is just simply entertaining, and little else.

Side note: Lino Ventura, who plays Max's nemesis Angelo here, would go on to play the lead role in Melville's grand tragedy Army of Shadows.
Posted by bza at 3:35 PM