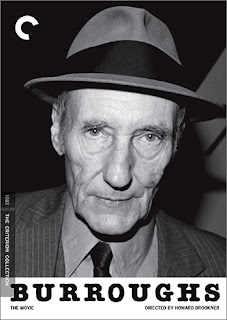 Burroughs: The Movie spent nearly three decades in the wilderness, waiting to be found by director Howard Brookner's nephew 20 years after his death. This of course adds to its off-kilter central figure and the film's loose structure, giving the film more underground cred, the key to a successful portrait of Burroughs. The author was one of the great subversives in American culture in the 20th century, and Burroughs: The Movie does an admirable job of serving as a companion piece to his writing by presenting Burroughs the character.

I've never read any of Burroughs's books in full, though I have read excerpts here and there. I'm not a huge fiction prose guy, but I do respect the work that Burroughs has done and the doors he opened for other writers who were similarly interested in exploring themes and subjects that had been suppressed by the mainstream. Unlike something like Bergman Island, however, I don't think you have to appreciate the author's work to enjoy the documentary - this is a film about a person and a movement that is certainly going to be welcomed by his fans, who will get a deeper understanding of the artist here, but it's also a well-made documentary about a unique character in American intellectual history.

What struck me most about Burroughs was this status as a true character. I think there are two kinds of artists in the world: people who practically sweat their work out of their pores and walk to a different beat than the rest of us and people who work really hard to attempt to be the first kind of person. Talent doesn't really enter into either of these things. There are very talented artists who are normal people who are simply able to translate their observations and skills into beautiful timeless material, while true artists languish in obscurity because they aren't able to translate their idiosyncratic vision into meaningful work. Burroughs is quite obviously a capital A Artist, which makes watching his documentary so fascinating and why a similar work on someone like, say, Paul McCartney or Tom Wolfe would be insufferable.

Because of the quirkiness of his character, the most direct comparison in the Collection is certainly Grey Gardens. Although Burroughs is nowhere near as clueless (and mentally unstable) as the Beales, Brookner takes a Maysles-style approach to the characters, and we enter a world that seems foreign to modern mainstream society (although most of that world in this movie is already gone by the time the cameras arrive on the scene, and we hear about it only in interviews). The cover Criterion created for the edition fits in with this theme - obviously there was no other choice but to put Burroughs front and center, but the use of black and white and the close up of Burroughs in his middle America uniform makes it seem like it would fit right in as a cover for Salesman. This balance of upstanding style and dark themes was, as Luc Sante points out in the accompanying essay, central to Burroughs's success as a writer, and it makes Burroughs a fun watch and a worthy oddity in the Collection.
Posted by bza at 8:49 AM