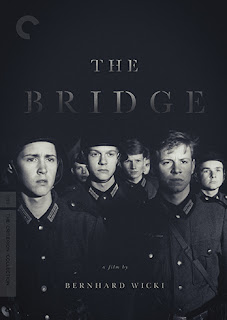 The Bridge is reminiscent of two very different Criterion World War II films from other key players in the war: Twenty-Four Eyes from Japan and Ballad of a Soldier from Russia. But it might be most similar to a movie from America that was used for entirely different purposes. I'll address them separately.

Like Twenty-Four Eyes, The Bridge is about a class of boys who would have to go off to fight in a war that was not their making, but that they believed in nonetheless. The teacher in each is a pacifist, but this does them little good - in fact, you could argue the teacher here inadvertently leads the boys down their path to ruin, though his plan seemed pretty sturdy when he first puts it into motion. Unlike Twenty-Four Eyes, however, which is about the death of soldiers only in as much as these deaths are felt by the women who stay at home, The Bridge is very much focused on the soldiers themselves. Or rather, these children, who aren't soldiers at all but are instead collateral damage in the German suicide mission that is the tail end of a war whose tide has turned.

Ballad of a Soldier was told from the winning side, though the USSR's losses in the war were enough to question that characterization. It differs substantially from the other two films in that it is a propaganda piece, designed as a universal parable. The Bridge occasionally reminded me of that film in its depiction of the boys, but ultimately it was the elemental and poetic style Wicki utilizes that reminded me of Soviet imagery of the era. The grammar here is basic, which is what the movie demands, allowing the boys' stories to unfold gradually and naturally, which leaves the final sequence that much more heartbreaking.

This is where the final film comes in, The Sullivans from 1944. Based on a famous American tragedy during World War II, the film concerns five brothers who were stationed on the same boat when it sank in the Pacific, killing them all (the event is referenced in Saving Private Ryan, where the mission to return home the only surviving son is a response to this tragedy). I'll refrain from spoiling the film's final moments, which are remarkably powerful regardless of your feelings about war, since this isn't a post about that movie and I urge anyone reading this to seek it out, as it's both a pretty good movie and an important political moment in American film (its release was a cathartic sensation and there were reports of people literally falling into the aisles crying). But I will say that the structure of that film mirrors this one, and while the two films are at odds with each other over the value of battle, they both want you to feel deeply the sacrifice of war and the tragedy of life ended too soon.

The final stake in the heart that is the card at the end of the film underscores the insignificance of what just happened. But it also raises an interesting question about the purpose of the film and the autobiographical novel it was based on. Obviously the fact that this is (roughly) a true story means it doesn't have to have a direct Animal Farm-style metaphor at its core. But the significance of the film in German history (and its success outside of the German borders) indicates it hit a pretty raw nerve. The simplest parallel is between the uselessness of the war in retrospect and how many men (and boys) were lost to a cause that was not just misguided (as it is here) but evil. But one could also see the film as a larger condemnation of masculine rhetoric around the honor of being a soldier. The kids in The Bridge are never taken seriously - by anyone in the film or by the film itself. Though they are teenagers, they often come across like they are much younger. When they find a liquor stash it doesn't seem certain that any of them know what to do with it. Their views on the war are expectedly simplistic, and the film never hesitates to condemn their attitudes - the same attitude that seals their fate in the final attack.

The Bridge could have very easily been a very sad film, but I think think it's mostly an angry one. The final card is meant to stir up that anger, the idea among what was undoubtedly a huge percentage of Germany that they had been had, with the consequence of sending their sons to the slaughter while their daughters burned in fire bombings. It's hard to feel bad for the country that perpetrated the greatest crime of the 20th century, but The Bridge at least effectively struggles with Germany's own scars. I don't think this is a great film, but it's an important one for film history and with so few obscure titles being pulled up by Criterion these days, it's easy to be thankful for its inclusion in the Collection.
Posted by bza at 6:51 PM