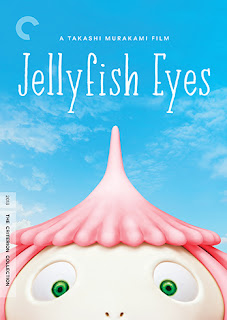 Jellyfish Eyes is one of the few unique films in the collection, a pop-tribute guerrilla blockbuster that hovers between so many worlds it's almost impossible to pin down. My interest in the film overshadows my affection for it, as some of the filmmaking falls very short of the excellence typically seen in a Criterion film. Still, it's a fascinating risk on the part of Janus - and therefore Criterion - and it will be interesting to see if it pays off.

Now that we've gotten that out of the way, let's start with the basics. Jellyfish Eyes is built out of four main influences: the Japanese kaiju tradition, pop anime like Pokemon, the family friendly blockbusters of Spielberg and Hollywood, and the high-art world of director Takashi Murakami's day job. All four are almost equally present in the film, but the most obvious to any film fan that approaches the film without any information will be the kaiju grounding of the film's structure. Although it establishes the creation of the monster in a decidedly anime fashion, melding secret society visuals with pop-spiritual mumbo jumbo, and frames the story around a child, the connections to Gojira are immediately apparent, even before the lumbering giant monster appears on the scene ready to destroy the city. The Fukashima disaster stands in for the atomic bomb, while Mr. Potato Head stands in for Godzilla, and there's a palpable sense of loss in both films, not just for an individual (in this case a dead father, an approximation of the absent father in E.T.) but for a way of life.

This kaiju connection is quite easily tied to the basic framework and visual aesthetic of the Pokemon franchise (and other similar Japanese anime and video games), which is similarly easily linked to "kids with buddies" films like E.T. (and less fantastical films like Shiloh or other kid/animal movies). The idea that Jellyfish Eyes was conceived as a live-action anime is not novel, and in fact the film was originally conceived as an animated movie before Murakami shifted to live action. Indeed, the movie cribs camera angles, sound effects, and quick cutting techniques in the action sequences almost directly from the low-rent anime he is intending to mimic. These connections are almost as obvious to even a casual viewer of the genre as the clear influence of the Pokemon creatures on the F.R.I.E.N.D.s of the story. In fact they are even more specific, considering the idea that each protagonist would have a protector or kindred spirit is a timeless archetype of literature and film, from the spirit animal of Native Americans to the patronus of the Harry Potter books.

The biggest problem with the use of this style is that, from a technical and critical perspective, it isn't especially good - particularly when incorporated into a real-life (low-budget) format. A good comparison film here is the Wachowskis' hideously underrated Speed Racer, where a similar transference from cheap Japanese anime to live-action kids movie met with success purely because they were able to pour lots and lots of money into the outcome. Without this opportunity to deliver anime-perfect compositions in a real-world playground, part of the presumed ambition of the film collapses before it can even get off the ground.

Despite this fatal flaw in the film, there's a really good argument to be made that all of this was intentional - that Murakami didn't especially care that his film was not shot well and came across as a bit stilted and underbaked. This is where the director's art career comes into play and debating the merits of the film must be done on several levels. Is Murakami as conscious and in command of his style behind the camera as he is in front of the canvas? Is the low art of Jellyfish Eyes intended to match disjointedly with the sophisticated social commentary of the film's politics? If you believe Murakami that he was indeed making a kids movie, does this negate any attempt to judge the film on a deeper level - especially if that level demands a rejection of the movie's effectiveness on its most basic surface?

These issues may have all been considered when Janus purchased the North American rights to Jellyfish Eyes, but I could just as easily see someone in the company respecting the film as an oddity impossible to deconstruct. The essay Criterion includes in its package for the film spends a great deal of time talking about Murakami as an artist, and less time evaluating the film itself. This doesn't mean that Criterion doesn't value the movie on its own, but I think it's safe to say they wouldn't have given it a second thought had Murakami not been attached. Still, its mere inclusion in the Collection demands a higher level of examination than it may get otherwise, and I do think there's a good case to be made that this isn't just a genre exercise.

Along with the tsunami references, the elements that hint that Murakami might have had something deeper and more subversive in mind here primarily stem from the iPhone-like devices each child is given when they receive their F.R.I.E.N.D. and the ominous Christian cult Saki's mother belongs to. The former is perhaps more congruent with the presumed intention of producing a movie accessible to kids, but it's impossible to let the latter slip by without pointing it out. This aspect of the story will supposedly play a bigger role in the future films, which indicates its importance in the larger story, a profile that seems totally incongruous with the family movie genre. The satire of this element is at the very least a nod to the adults dragged along to the movie, but it seems much more likely that it is just the most obvious aspect of the film that keys in viewers to the larger plan, that the movie was made more for adults who like these kinds of movies than for the kids these kinds of movies are ostensibly for.

So what to make of the devices and the religious material? After a first watch, I don't know if the themes are that compelling, and like a lot of the movie, their executions feel underbaked. Like so much of Jellyfish Eyes, the conceptual underpinning is very strong, but what ends up on screen feels a bit like some smart talented kids dicking around. The devices are not developed beyond their initial introduction, and only serve to highlight the division between Masashi and the other kids. Similarly, the church seems like the most basic of contrasts with the main conflict, and any potential social satire that might come in subsequent installments would not have much to build on here.

Of course, the one immediately appealing aspect of the film is one I have yet to discuss: Murakami's creature designs. Although the film doesn't exactly impress in the effects department, the basic designs of the creatures and their personalities are highly appealing and enjoyable. Although I am partial to Saki's Ludo-like F.R.I.E.N.D., the smaller Pokemon-style majority is also a step above most of what we see in this kind of film, and it makes the movie pretty consistently fun to look at.

Still, you can't help coming away from the movie with the idea that there wasn't anyone who knew how to make a movie in a position of power. According to many stores about the movie there were massive reworkings after an initial screening for friends was deemed incomprehensible, and I dont know that they turned it around in subsequent versions. In a lot of ways, this feels very much like an experiment from a talented artist that lacks the technical know-how to implement his vision. Most movies of this nature are seen by only a handful of people, and almost never seen by the wide and discerning audience Criterion has at their disposal. But because Murakami is not the average just-starting-out filmmaker, that circle of potential viewers expanded significantly, and the movie's reputation has suffered because of it.

There are a lot of arguments for why Criterion shouldn't have released Jellyfish Eyes, and unlike Tiny Furniture I definitely don't have a spectacular reason for dismissing all of them. As I mentioned in that post, I'm not one to argue that Criterion shouldn't release a film because they could have released other better films (though recent releases slates have me concerned for lesser-known older foreign films). That's like arguing the Academy got every Best Picture wrong because the best movie of that year wasn't even nominated - there are always amazing, better movies out there to be discovered. And I don't think every movie they release needs to be a masterpiece - only about a quarter of the films I've posted about here would I consider to be five-star masterpieces, yet I could count on both hands the films I would say don't deserve to be Criterion films with room to spare.

I do, however, think that Jellyfish Eyes feels more like a pick made out of aspiration and association. Murakami might very well turn out to be an impressive filmmaker with a uniquely odd eye for family cinema. Similarly, this might be the best chance Criterion gets to bring anime into the family, considering how difficult it is to license the best of that genre (Akira was released on Laserdisc, but will almost certainly never see the light of day on Criterion blu). These two facets of the film certainly have the potential to improve with sequels and other projects from Murakami, which makes this a bit of a bet on future returns. That's a risky proposition, and it's likely there were some detractors within the company on this choice - the film currently sits at 18% on Rotten Tomatoes (though it has just 11 reviews) - and their concerns were certainly echoed by the vast majority of Criterion fans, making this one of the most controversial releases of last year (though for my money Mister Johnson is far more unwarranted). But I think the best reason for this movie to be included in the Collection is more simple than the tangential connection to anime or high art: there's simply nothing else like it in the Collection.
Posted by bza at 11:41 AM