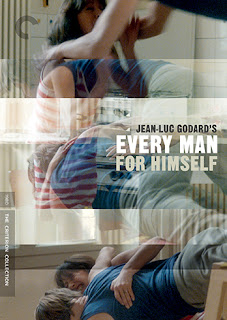 Godard's celestial position in film history belies his challenging body of work. In comparison to even the other pillars of the Criterion Collection - Kurosawa, Bergman, Fellini, and Ozu - Godard's catalog lacks any movie that would be easy viewing for the average modern filmgoer. Even relatively lighter films like A Woman is a Woman or Alphaville are dense, analytical statements that require multiple viewings to absorb. Breathless, his masterpiece and perhaps the most important movie in film history, has many moments that point the way into the narrative, but in comparison to the most famous films by those other directors like Seven Samurai, 8 and 1/2, and even Seventh Seal or Tokyo Story Godard's debut remains a shock to the Hollywood-fed system (ironic of course because Breathless is so obviously indebted to the earlier incarnation of that system).

Having said all that, Godard's first ten years of filmmaking produced relatively straightforward films when compared to his subsequent career, which began with radical political video in the 1970s before transitioning into experimental (though comparably more conventional) features in the 80s where Godard's politics reattached to his commentary on the nature of his chosen medium. This new Godard 2.0, which began with Every Man for Himself, which Godard called his "second first film," was less interested in film as a driver of change than as a tool with which to illuminate that change already taking place. That Godard viewed the film as a return to beginnings is not surprising considering what he had been doing for the past decade. But it also feels true. Though there are connections to his earlier work here, it is closer in style to In Praise of Love than Vivre Sa Vie.

Godard is not just challenging on a technical level, however. His films are usually angry, often dark, and walk the line between exploitative and radically confrontational. His obsession with prostitution is perhaps the most challenging aspect of his films for me, and I often wonder if he crosses the line from investigating the nature of misogyny to exploiting and perpetuating it. The "outrageous" sex circle that a john creates late in this film seems as empty thematically as it is emotionally, and it's moments like this where Godard's ostensible feminism seems overly confident that the average viewer will catch his gist. The whole Isabelle Huppert segment here was much less interesting to me because of Godard's hooker thing, but I don't know that I can say I "enjoyed" the couple's stories either. These are distasteful people for the most part, and I think a reason why Godard's later films have never been able to generate a strong reception the way his earlier work did (though I have yet to see his most recent film, which was a relative success) is that everything after his time in the wilderness lacks the cinematic glee of his first decade, which went a long way toward making the bitter pill go down. By this point in his career, Godard no longer believed in the movies, something even his angriest films like Weekend and Contempt had going for them. Godard of the last 45 years has implicated himself in film's shortcomings, which leaves us all vulnerable.
Posted by bza at 6:31 PM