#717: The Young Girls of Rochefort 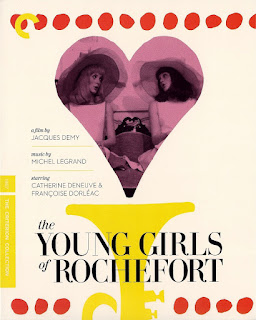 Criterion calls The Young Girls of Rochefort "an effervescent confection" in their description of the film, and it's hard to put it more accurately than that. Visually the film has much in common with its immediate predecessor The Umbrellas of Cherbourg, Demy's most famous film and a true classic of French cinema, and it also shares the musical genre with that film. But the themes of The Young Girls of Rochefort are nearly identical to those of Demy's first film, the marvelous Lola. Both films weave multiple romantic and familial threads together on the coast of France to tell a story of chance and fate that delights as often as it surprises. Here, however, the B&W drama has been replaced with technicolor music, and while some of the artistic impact has been lost in transition, the sheer pleasure of the thing remains and perhaps has even improved.

As I've mentioned before on this site, I'm not a huge fan of musicals, though I can pick out the ones I love when I see them. One of the thing that immediately won me over in The Young Girls of Rochefort was the style of the music - any pop nerd like me knows that 60s French pop was one of the peaks of the genre, and artists like Serge Gainsbourg, Francois Hardy, and Jacques Brel (who was technically Belgian but whatever) informed a strand of pop that turned seriously avant and cutting edge in subsequent decades. Michel Legrand was on the outskirts of this movement, with one foot firmly in the jazz world, but his work here has many echoes of the popular music in France of the time, and it's seriously awesome, the kind of stuff that transcends the cheesy reputation of musical theater.

The story of The Young Girls of Rochefort is largely enjoyable, though no one generates the kind of sympathy that Lola does in Demy's earlier film - it's never unclear here that you're watching a movie rather than peeking in on the lives of characters. In fact, the next time I watch The Young Girls of Rochefort I plan on turning off the subtitles, and I recommend anyone reading this do the same at least for one round of viewing - perhaps even the first. Sure there are some great plot threads that get tied together and a few brief stretches of notable dialogue. But the vast majority of the film is enjoyable but inessential lyrics quickly tossed at the viewer to distract them from the wonderful music and striking visuals.

It's funny, I'd only ever seen Umbrellas before watching any of the other films in this set - in fact, I'd only heard of Lola before the box was announced. For one reason or another the former film exists outside of Demy's catalog, the masterpiece that rises above the rest of his presumably pedestrian output. His second most noteworthy claim to fame was being married to the great Agnes Varda, and that was that. Yet this set recasts the director as a forward-thinking auteur who had a particular point of view from the beginning, even as he refined his delivery system throughout the 60s. I'm very much looking forward to the next two films (even though they are considered less effective than the first two thirds of the set) and The Young Girls of Rochefort is an easy recommendation for anyone open to the music and style of the 60s, even if the filmmaking prowess on display is not likely to grab them the way it would anyone who appreciates a professionally and lovingly made film.
Posted by bza at 8:36 PM