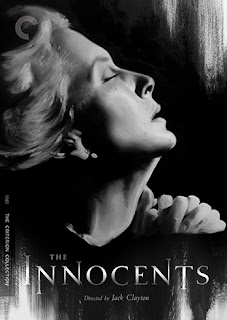 Much like its characters, The Innocents seems to exist between worlds; England and Hollywood; code cinema and modern authenticity; reserved mystery and psychological horror; proper literature and exploitative pulp; art film and studio product. It straddles these worlds in such a way that makes the film feel even more off-kilter and terrifying, underscoring the strengths of the story rather than weighing it down. It's certainly one of the most significant horror films in the Collection.

The movie is immediately surprising for a Fox film from 1961. It opens without any picture as a young girl sings a folk song without accompaniment. This continues even over the 20th Century Fox logo (rare enough for it to be striking) and leads into a brief shot of a woman praying before moving to the opening scene of the plot in which Kerr is hired as the governess. The opening sets the creepy, old-fashioned tone for the film but is largely forgotten until the song pops up again, and finally is explained as the end doubles back on the moment, leaving one to wonder how much of what's happened was a flashback, a dream, or a psychotic fictionalization of what happened.

The original story of Henry James's Turn of the Screw, on which the play was based that was then adapted into the film, is able to create a larger mystery because when the governess sees ghosts they are simply from her perspective. A film cannot show a ghost to a character without the viewer seeing it, unless the ghost is always offscreen, which even then would prove as suspicious as seeing the ghost is assuring. This means the mystery of whether of not the governess is a reliable narrator is deeper and the book is consequently more psychological. Still, there is something about Kerr here that feels off, and I don't think it's impossible to argue that her own actions are a bit unhinged, even if it is easier to take everything literally. In a way, the movie is more appealing if there are no ghosts, because the story of the evil couple that possessed the children is so puritanical and superstitious.

My favorite thing about the film was unquestionably the cinematography, and it's this aspect of the movie that makes the mystery richer. There's an explanation of why the film was shot with a blurred border in the Criterion set, but the end effect is satisfying on its own. The movie seems to exist in a beautiful fever dream, with the characters isolated from each other and reality. I thought of two Kubrick films while watching The Innocents. The first, The Shining, came up for obvious reasons - a woman stuck in an isolated giant building haunted by ghosts. But the film I was most reminded of was Barry Lyndon, another candlelit masterpiece with stunningly beautiful (albeit color) photography. Both films use their natural lighting to heighten reality and set the mood for the time period. The Innocents delivers candles that seem to create the photography on their own, resulting in the soft edges and mysterious glow of the film's nighttime scenes.

Although there were a handful of "creepy children" films before The Innocents, this is the oldest film I've seen that uses most of the elements of this subgenre in the modern way (children singing simple songs, music boxes, possessions, creepy dialogue that has multiple meanings, etc). This doesn't necessarily make it a better film (though all of these elements are executed better than in most subsequent films) but it does help its case as an important step in the evolution of horror.

If I was going to hesitate to canonize The Innocents (and I am), it would be because of the somewhat creaky plot machinations of Kerr's character. It's not entirely clear why her character seems to know with great certainty every step needed to free the children of her curse - though of course this makes the case for her insanity - and the way she goes about explaining it all to Mrs. Grose is the kind of exposition that hurts the film rather than helping the viewer. Kerr's performance is difficult to pick apart considering it was done in 1961, but she can occasionally come across as inauthentic and dated in today's eyes, something I've always thought about her and was hoping to avoid with this performance. That said, these are minor quibbles that do not overshadow the remarkable accomplishments of The Innocents, and it's worth underscoring just how vital the film feels to modern horror and supernatural filmmaking. I'd put it on the shortlist for any director interested in learning more about horror technique, and I look forward to watching it again to see how it's all put together.

One other interesting note about The Innocents: I decided to watch this now basically at random - it was the next film by spine that I don't own and isn't on Hulu - unaware that it was written by Truman Capote. Of course, In Cold Blood was just released in the past few months and covered by David Blakeslee over at Criterion Reflections, where I expressed mixed feelings about that much more famous and based-on-a-true-story thriller. Interestingly, Capote wrote the script for The Innocents while researching In Cold Blood, further tying the two to each other. Putting The Innocents in this context might make my positive response to a movie that ends (spoiler alert) with a dead child seem a bit hypocritical (despite the obvious excuse that the film is purely fictional). But I think it's important to put the entertainment value of horror in the context of the themes its intending to explore and expose for the viewer.
Posted by bza at 8:37 AM