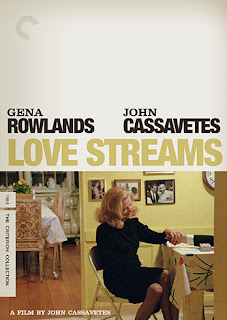 One of the hardest things I had to get over in my initial burst of activity in this journey was making assumptions about a film based on prior films by directors I was less than enthusiastic about. Staring at 10 Ozu or Fassbinder films and assuming they would all be boring or distasteful (respectively) was not going to allow me to open my mind to an individual piece of art and experience it with a fresh perspective. This would inevitably take me down the path to viewing my watching habits as a chore to be completed. Avoiding this pitfall has paid dividends, particularly when looking at the two directors mentioned above - Ozu is now one of my most loved directors, and while I may have a more, ahem, complicated relationship with Fassbinder, a few of his films have been spectacular cinematic experiences I will treasure.

Still, this isn't always easy, and it gets progressively harder the deeper into a filmmaker's Criterion catalog you get. After having a fairly mixed response to the Cassavetes box, when Love Streams popped up as a Criterion release I couldn't help but think "dammit." This is especially true because of the nature of the film. As I mentioned in my post on Une chambre en ville, many Criterion films from the 80s are late-era works by the established masters of 50s and 60s cinema, and many of them are not particularly good when viewed outside the context of their respective director's oeuvre. So knowing that I didn't like Cassavetes too much and seeing that Love Streams was a lesser-known later work from the director made me quite wary. It immediately seemed like a token release only for the fans, a movie that wouldn't belong in the Collection without the name above the title. I sat down to endure it and file it away on the blog.

I was totally wrong. Not only do I think Love Streams is deserving of its place in the Collection, I think it's one of the best Cassavetes films, and it's the one that I loved the most. What's most interesting about my reaction is that this is most definitively A Cassavetes Film, with verite-style camera work, craft-heavy performances, and deliberate pacing. It's also got all the raw drama and broken characters of his more high-profile work from the 60s and 70s. Yet the movie never seems like an exercise in character craft the way even his strongest early films like Faces do. This is a fully formed world Cassavetes reveals, and the fact that the movie is based on a play would be difficult to pull out of what we see (apparently it was heavily rewritten by Cassavetes). Rowlands in particular, one of the great underrated actresses of her generation, inhabits her role so seemingly effortlessly that you hardly remember you are watching a performance. The way Cassavetes shoots her only underscores this impressive feat - look at the shot they used for the cover, the way he frames her in between the composed background and the harsh imposing foreground, squeezed into a folding chair. Her brother is reaching out to her but we can only see his hand - the camera doesn't move to reveal him, but instead lingers in this middle-ground emptiness for the length of the shot. Nothing about the way Cassavetes does this is overbearing or even necessarily prominent, yet it is deliberately present. This is filmmaking of the highest order.

Although it doesn't get to the core of what I loved about the film, the most striking thing about watching the first half hour of the movie was how much it reminded me of Boogie Nights. Despite the fact that this film wasn't available for large stretches of its afterlife, I have little doubt that PTA saw the movie and examined it for style and rhythm. The most obvious comparison is the custody scene, which PTA seems to have lifted almost directly from this movie, but Rowlands in general must have had an impact on Amber, Julianne Moore's character in Boogie Nights, and Cassavetes also seems like a direct influence on the Burt Reynolds character. Similarly, the way Cassavetes pities his characters while following them unflinchingly into their emotional depths and living with them there is the most impressive achievement of Boogie Nights (and PTA's early career in general). The characters that Cassavetes and Rowlands portray here are not good people, but they are people, real and breathing and fighting for life.

Boogie Nights, of course, is packed with flashy cinematic flourishes and modern ideas about editing, music use, and dialog. Love Streams is a much quieter and more confident picture. Part of this contrast is that one film was made at the beginning of a career, the other at the end. But most of it is the way in which the two directors work. I am a big fan of PTA, and I think the last three movies he's made will eventually have a stronger reputation than any of the first four. But he's a director that is constantly crafting a movie. He wants you to know it's a movie, partially because he wants you to see all the things he's doing, but mostly because he really likes movies. Why not make your movie a movie?

Cassavetes doesn't particularly care for movies. He's a filmmaker almost incidentally, because it's the pen he uses to craft his work. Just as he carried on his acting career to support his filmmaking, his filmmaking is there to support his worlds. What's most important to him is his characters and their inner-journeys, and finally how this reflects back onto our own inner-lives. I think this is a big part of why I didn't immediately identify with his films (I'm a movies guy, fyi) but here with his craft so refined and spare it doesn't keep me at so much of a distance. There is plenty of heartbreak in Love Streams, but the way Cassavetes lets his characters breathe assures us that they will live to fight again.

There's always a lot of consternation on the internet about projects like mine. "Gosh darnit, movies shouldn't be a mission to complete!" etc. There's probably something to that, and it certainly isn't for everybody. But with an infinite number of films available (especially these days with streaming), picking a curated set of movies and forcing yourself to take in each and every one means you will inevitably watch a large number of movies you would never otherwise watch. Many of these movies will end up being ones you never should have watched after all (Salo and The Magic Flute come to mind in my own journey, for entirely separate reasons). But a handful will change the way you look at movies, and over the course of a journey it will change the way you look at watching movies. Love Streams reveals for me personally that even after nearly 800 of these films I still have things to discover and learn in the most unexpected places. I'm eternally grateful to Criterion for that, and whether you are doing what I'm doing or pick whatever you're in the mood for tonight, I hope you make an effort somewhere in your artistic consumption to force yourself out of your comfort zone.
Posted by bza at 11:00 AM