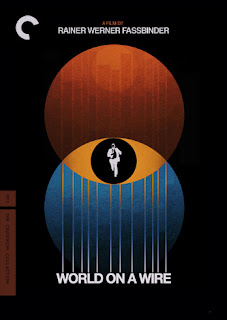 The Venn diagram on the cover is profoundly appropriate: World on a Wire straddles multiple worlds just as effortlessly as its story does. At once b-grade sci-fi and a highly sophisticated view of both the future of technology and the past of cinema, the film manages to pack deep philosophical questions into a slick and sly package. It evokes The Twilight Zone just as much as it does 2001 - Last Year at Marienbad nearly as often as Invasion of the Body Snatchers - but its gaze is mostly cast paradoxically deep into the near future. This is moviemaking at its most exhilarating: tongue in cheek, intellectual fun that wants to drag you through the funhouse.

Since its theatrical release stateside and subsequent Criterion release over the last few years, Fassbinder's TV miniseries has been unfailingly linked to The Matrix, which almost certainly took a cue from at the very least this film's source material, a book written about simulacra in the 60s. This is a great entry point for the contemporary viewer, but it does a disservice to the film's standalone merits. I happen to think the Wachowskis are often misunderstood, but Fassbinder is the ultimate in offbeat directors and World on a Wire is his most literal look at his slightly askew perspective on reality. Centered around a company that has been commissioned by the German government to construct a huge simulation of reality with a town of 10,000 "people," the film follows one of the scientists in charge of the project as he searches for the truth not just of his project's true purpose but of his reality itself.

Fassbinder's real accomplishment in World on a Wire is to construct a visual style that is just as layered as his plot. The frame is packed with geometric illusions, multiple mirrors, and shifting perspectives - just as his characters slowly descend down the rabbit hole. By slightly tweaking his contemporary reality, Fassbinder avoids dating his production in a negative way - this is still essentially the 70s, wide lapels and all. But his surreal staging and slowly evolving camera movements evoke dream sequences from Fellini, and the film's slow boil of a plot turns up the paranoia until the movie's final act seems almost revolutionary. Like The Matrix, World on a Wire depicts waking up as an act of rebellion, and illusion is the power holding us back. The paradox of a film about the oppression of illusion must not have been lost on Fassbinder, and his gleeful ironic touch makes the movie more than just a clever tall tale. Essential viewing.
Posted by bza at 6:54 AM