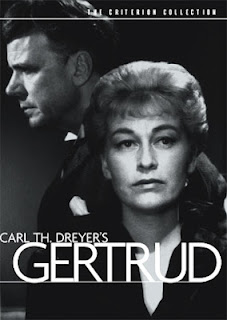 I can't remember the last movie that elicited such a wide swing in my opinion of it within the span of one viewing as did Gertrud, the final Dreyer film both in Criterion's boxset and in his career. Created nearly forty years after Dreyer's silent landmark, The Passion of Joan of Arc, Gertrud was released into a film landscape dominated by European filmmakers who were younger than Dreyer's first masterpiece and grew up idolizing the elder statesman. I mention this because it's important to note the context in which this film was released when trying to understand just how much of a lightning bolt it was on the cinematic scene - how unexpected and how revolutionary.

As I've mentioned before on this blog, Paul Schrader is famous for penning a thesis linking Dreyer to Ozu and Bresson. Both of these directors employed a cinematic style that was unique in its pacing, narrative technique, and visual identity. But once you fall into the rhythms of their work, the entire oeuvre opens up to you and the issue of accessibility is tossed aside. Not so with Dreyer, whose cinematic language became more and more unique and foreign as his career went on. Much of the flashiness of his earlier work has been replaced here by an almost sparse grammatical structure. More importantly, his characters have slowly become divorced from reality. The construct of their existence veers towards the abstract in Gertrud, particularly because they refuse to look at each other - at one point early in Gertrud I laughed out loud because it seemed like the actors were being held at gunpoint, forced to recite lines they didn't want to give to other actors they didn't care to know in a movie they had refused to appear in.

And yet... just offering my attention to the film seemed to slowly bind me to its emotional core. The film gradually began to make sense to me, Gertrud's personal suffering felt entirely real, and the themes, performances, and - yes - even Dreyer's style began to make total sense. Gertrud began as a strange joke played on Dreyer's audience and turned into a beautiful and moving ode to a life uncompromised. By the time it was finished, I had little doubt that Gertrud is Dreyer's masterpiece, the culmination of his life's work. I can't wait to watch this one again and see just how he managed to pull it off.

Note: I'm going to mention two movies that came to mind while watching Gertrud, one topical and one embarrassing. The topical one is Certified Copy, which Criterion just released and I just rewatched, confirming my initial impression of it as one of the great films of the past few years. Like Gertrud, Certified Copy is partially about the nature of love. I watched Kiarostami's discussion of this element just before watching Gertrud and was pleasantly surprised to see many of the themes he discusses come up frequently in the film - sometimes quite literally, with Gertrud expressing similar sentiments. The embarrassing one is Titanic. Yes, I couldn't help but think of Rose in the final sequence of Gertrud, though of course Rose didn't choose to lose her one true love and she did (apparently) eventually get married. But still, you didn't think of it? Fuck you, you totally did. You know what? Just go watch Gertrud and try to get this comparison out of your head.
Posted by bza at 6:37 AM