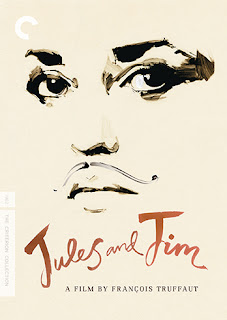 Jules and Jim was the first foreign-language film I ever fell in love with. My teacher recommended it to me after a long conversation about film, and I picked it up at the video store on the way home. I had seen modern foreign movies before and really enjoyed many of them - films like Cinema Paradiso and even a handful of Hong Kong action movies. And I had tried to get into a few older "classics" when they came on TV or when I was force-fed them in class. But I never fell head over heels until Jules and Jim.

Honestly, it was so long ago that I don't really know what did it. Something about the film just clicked for me, I guess. But what was so interesting about seeing Jules and Jim this past weekend on the big screen was specific my memories of the film had been and how differently I responded to it some fifteen years later. The gap wasn't in quality - I loved the film just as much as I had years ago, and the viewing cemented the film's place as my favorite Truffaut film and one of my favorite peaks in the early years of the New Wave.

Instead, what diverted so greatly from the image in my head was how I responded to the central character of the film - not Jules or Jim, but Catherine, who as everyone knows is the sun which the film revolves around. In my memory, I remembered Catherine as the oppressed woman, desperate to live her own life and escape the conventional role forced upon her by Jules and Jim. In my head, Catherine had died as an act of rebellion against the men forcing her to live a life she didn't want, to fit into a role she never asked for. The final indignity of having her wish to spread her ashes ignored was the choice of Jules - not the state - taking one last opportunity to imprison her.

I guess the first question I have to ask myself is where did I get this impression? Was it from a truly unique reading of the film that was specific to my teenage worldview, or was it a misguided recollection of a long distant viewing that had been altered by the passing of time? Either way, this second viewing completely morphed my perceptions. As the film went on I began to hate Catherine for the way she was acting. I resented her power over the men and rejected her troubled need to avoid her own emotional difficulties by throwing them back into someone else's face.

From a technical standpoint, Truffaut's movie is still as moving as ever. The race on the bridge is exhilarating, the brief freeze frames feel just as revolutionary and evoke a sense of cinematic joy that was characteristic of the early French New Wave but was rarely folded into a story as seamlessly as it was here. Truffaut's use of narration is clever, providing the film with a droll omniscient conscience, and the film's structure is almost deceptively breezy. In my opinion, it's not just Truffaut's best movie, but the best movie produced by the New Wave.

But then something funny happened to me. As I thought more and more about the movie, I began to move away from my immediate condemnation of Catherine and started to admire her again. In some ways Catherine is a stereotypical female protagonist in the worst sense: unpredictably emotional, jealous and careless, impulsive and cruel. But the essential components of her character tilt her towards feminism. She is introduced as not just the metaphoric ideal for the two friends (who up to this point have been almost entirely focused on exploiting women in their own personal game) but as the direct representation of the perfect smile they discovered (while watching film, no less) on a statue. Catherine is not their third musketeer, but their possession, meant to reflect back on them a mysterious and seductive gaze but offer nothing of her own. Throughout the film, Catherine fights against this role she has been forced into, desperate at every step to make the two friends feel what she is experiencing at their thoughtless hand. Her final act is one of anarchic rebellion, smashing the bond between Jules and Jim in as permanent a manner as she can. From this perspective, Jules and Jim is a movie about Catherine trying to change the title.

I'm not saying this is the definitive reading of the film, but I do see an unmistakable pull towards this in the famous river sequence, where Jules's sexist ramblings prompt Catherine to jump into the Seine. This scene sums up Catherine's role throughout the film as a woman trapped in a world and a situation that demands acquiescence but elicits nothing from her but resistance in the form of interpersonal war. When the race finishes, Jim complains to Catherine, "You cheated." Not interested in the rules of a society that has cast her in the secondary role, she replies, "But I won." Maybe Catherine doesn't win in the end - her ashes remain prisoner, her dying wish deemed against regulations. But maybe just choosing when to die - and smashing to piece "Jules and Jim" - is her victory. It's an ugly, cautionary win, but it's a win nonetheless.
Posted by bza at 8:25 AM