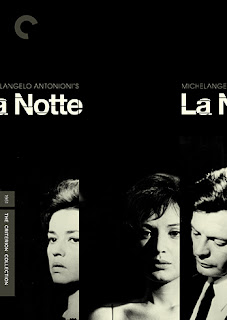 I watched La Notte years ago while struggling to come to terms with Antonioni - at the time, I was obsessed with Blow-Up, but found L'Avventura puzzling and dull - but I remember little of it and I actually think I probably fell asleep halfway through. This doesn't really matter, but I mention it because I probably wouldn't have liked the film anyway as I was certainly too young to understand the sadness and longing in the film. Made just a year after Antonioni's masterpiece, La Notte maintains the same tone and modernist perspective, but in every other way feels like it was made by an artist twenty years older. It's Autumn to L'Avventura's Summer.

La Notte is more actor-driven than its better-known older sibling. This is partially because the film is more specific to its characters, but its mainly due to the presence of three iconic actors: Jeanne Moreau, Marcello Mastroianni, and Antonioni's muse Monica Vitti. They are all wonderful here, and they make the movie a more immediately engaging film than L'Avventura, even if it is more subtle and less audacious. I love Moreau to death in Jules and Jim, but her character her is equally engaging and yet very different. The final scene is so emotional and real, a perfect ending.

La Notte is perhaps best compared to Kubrick's final masterpiece, Eyes Wide Shut. Both films revolve around a married couple that has lost their passion for each other. They have reached the point where intimacy becomes dullness. One night throws all of that into disarray, and they are left with only one option - fucking. The films are equally dark, but La Notte never feels like the dream Eyes Wide Shut is constantly flirting with. It's a very real film, but with a sharp psychological edge that makes it a compelling portrait of a broken marriage and two lonely people desperate for a connection. It might not have the remarkable vision and ambition of L'Avventura, but its a masterpiece in its own right.
Posted by bza at 11:15 AM