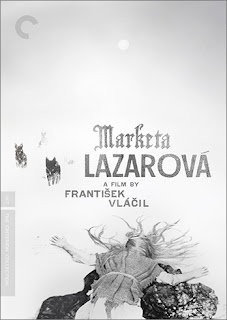 Marketa Lazarová is a beautiful film - perhaps one of the most beautiful in the Collection. Unfortunately, it's also extremely opaque and complex, making it a difficult film to fully comprehend on a first watch. In fact, I watched the film nearly a month ago, but every time I go to write a review I end up being somewhat unsure of what I watched, which leads me to seek out one more article about it online to read more about its creation and reception.

There are two things that immediately jump out at me about this once-forgotten Czech film that has slowly become one of the most praised in its country and, with this release especially, is now ready to enter the canon of world cinema. The first is just how poorly acted the film is, particularly in comparison to its expert filmmaking. Seeing a truly gorgeous and masterfully directed movie featuring actors who frequently take you out of the film is a strange experience, a study in contrasts when the limitations of auteurism are laid bare. When you are working with people that really shouldn't be in movies, even the greatest cinematography can't cover it up.

Second, seeing the film in its modern context - and essentially watching a movie being elevated to the near-upper echelon of cinema - is fascinating, especially when it's a film I didn't especially care for. Part of my negative feelings toward it certainly come from my own limitations with these types of historical, highly literate and impressionistic narratives. Alexander Nevsky, another difficult presumed masterpiece from behind the Iron Curtain, springs to mind as a comparison - though that film has long been in the canon, while this one is merely storming the gates. But I think another big part of it is just my lack of engagement with the story, which I find extremely antiquated and almost wholly irrelevant to modern times. For this reason, its elevation over the last decade fascinates me because it is clearly not coming from a reassessment of the film's relevance (like, say, Vertigo) but rather from a new appreciation of its technique, and a sort of intellectual guilt over the idea that it was once passed over by the cultural gatekeepers.

Marketa Lazarová is certainly worth seeing (it's on Hulu), if only for how breathtaking its visuals are. But the vast majority of people are going to have a difficult time hanging with the narrative, if only because it's difficult to see from outside its cultural context how the film can possibly connect on an emotional level.
Posted by bza at 4:51 PM