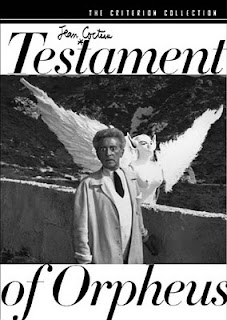 I loved this movie for a good portion of its running time, but by the end, I was a little bored. It reminded me of Deconstructing Harry a little bit (which I'm sure was intentional on Woody Allen's part) but it also reminded me that movies were already extremely self-referential in 1959. The opening sequence of Cocteau being unstuck in time is a fascinating twenty or so minutes of film, and there are plenty of other great moments. But there ends up being a few too many backwards shots and a little too much cryptic talking by the end.

Side note: it was a surprise and pleasure to see Jean-Pierre Léaud with a cameo in the film, which was made right after his most famous film, The 400 Blows (and apparently Cocteau, having run out of money, used Truffaut's prize money from that film to finish this one). Léaud is so strongly associated with the New Wave that seeing him in a Cocteau film is a bit like being unstuck in time in its own way.
Posted by bza at 6:42 AM