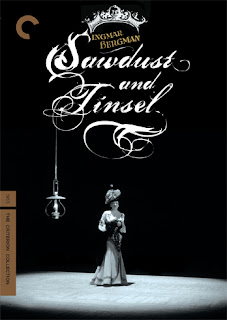 Circuses are not my favorite, but Sawdust and Tinsel is about a circus the way La Strada is about a circus, which is to say not much. In fact, the films share a lot in common, as both feature rundown circuses struggling to get by and gruff older men attached to younger women. Of course, those women aren't exactly the same, and Bergman's film is more about issues of identity and jealousy than loyalty and love. Fellini was a fundamentally more upbeat director than Bergman (which isn't saying much) and this film, like many of his films, ends up being extremely sad and emotionally wrenching. However, Sawdust and Tinsel isn't a masterpiece, but instead a film in which a great director comes into his own. This is Bergman's 13th film, but it feels like a partially formed version of many of his films to come, a toe dip, if you will, into the themes he would continue to explore throughout his career. Because of this, it's an interesting historical artifact, and a reasonably strong film. But it would not be in the collection if it had been made by anyone else.
Posted by bza at 6:20 PM