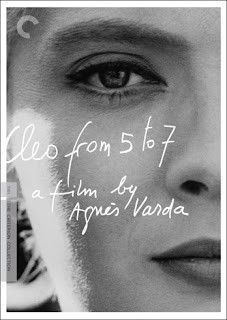 One of the premier films of the French New Wave, Cléo de 5 à 7 is one of the more effective "real time" films I've ever seen. The film begins with Cléo, an up and coming pop singer, having her tarot cards read. The cards are in color, but the film is in black and white. Cléo is told she is sick, and she becomes distraught. This, we learn, is why she had her cards read in the first place: she is waiting to her back about her cancer biopsy. The next hour and a half consists of Cléo wandering through Paris, encountering co-workers, friends, lovers, and strangers along the way.
The real-time structure of the film allows the movie to wind its way through Paris with Cléo as she takes taxis and buses to her destinations. The nitpick here is obvious: if the film is in real time and only lasts 90 minutes, why isn't it called Cléo from 5 to 6:30? But beyond that the gimmick is extremely successful.

The real appeal of the film lies in the subtle yet highly stylized technique of Varda, who had never made a feature-length film before (note: where'd I get that?). The camera prowls around Cléo as if she were prey, particularly in the brilliant hat shopping scene. When Cléo first encounters people she knows, we hear their thoughts about her in order to establish their relationship. And in the most moving and effortlessly surreal scene, Cléo begins singing a song her songwriters have written for her. Her voice is accompanied by piano only, but as the song gets more intense, the camera pulls in until their is no one else in the room and the music swells into something else, from another place, and Cléo is alone with the song until she collapses from the emotion of it all and is snapped back into reality. It's a show-stopping scene that makes the film worth viewing just for that one brief moment.
Posted by bza at 7:56 AM