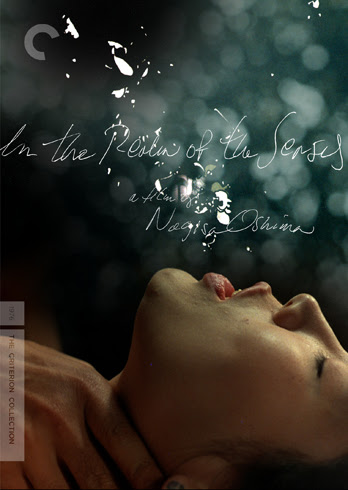 A sexual train wreck. Nagisa Oshima's In the Realm of the Senses is similar to Cronenberg's excellent Crash (which deserves Criterion treatment) in that watching it can be difficult and certainly uncomfortable. Both films are meant to expose you to the ultimate personal secrets, those of sexuality and its deviants. But beyond that, the comparison falters. This film is highly political, both in the statement it is making about Japan during the film's time period (right before WWII) and in the way it treats and depicts sexuality (the film is still banned in Japan, and has never been shown in full there). This is probably the most graphic sexual film I have ever seen that would not be classified as pornography (though I'm sure many, many people would argue with that choice). It's also one of the most haunting, moving, and brutally honest films, to the point where I would have a difficult time saying whether or not I believe it is a good movie.

The acting is excellent, the sets and cinematography are beautiful, and the direction is extremely thoughtful and challenging. So in a technical sense it is a well-made film. Yet I am sensitive to the criticisms of the film, which often rest on the assumption that an equally powerful film could have been made without what some feel is gratuitous sex and violence. The film is certainly entirely about sex - there are maybe one or two scenes that do not have sex as at least a backdrop to the actions or conversations taking place. And in no way is the film an enjoyable viewing. The question, I suppose, becomes whether or not the message of the film is worth the effort it takes to watch the film.

In the Realm of the Senses is based on the true story of a woman who accidentally murdered her lover and then cut off his penis. The event happened in the mid-30s in Japan, just as the country was marching to war, and the woman became a famous - and popular - figure in the country. Many people viewed her popularity as a rejection of the nationalist forces and as a call for individuality. This explains the title, which implies that in regards to sexuality between consenting adults, who is to judge and legislate on people? The two lovers become so obsessed with each other's bodies throughout the film that they stop eating and sleeping, only leaving their room long enough to make enough money to continue living there. Eventually this destroys them, and the death and resulting castration (which is shown in graphic detail, by the way) is juxtaposed with the destiny Japan finds itself headed towards, a different form of obsession leading towards self-destruction.

It's impossible to compare this film to the larger portion of film because there are so few films that treat sexuality in an open way that do not primarily exist to titilate. There is plenty more I can say about the film - and I recommend anyone who thinks they can take a viewing to do so and then read the excellent essays on the Criterion site - but I will instead just say that I think it ultimately succeeds because it believes in itself. If there had been a feeling during the film that the cast and crew were unsure of the movie they were producing, it could have easily shifted into a grim version of pornography that existed to attract the jaded or the disturbed. As it stands, though, In the Realm of the Senses is a movie about themes that aren't raised very often in film, if at all, and done in a forceful way that isn't afraid of its subject matter. It's an impressive feat, even if it's not an enjoyable one.
Posted by bza at 8:28 PM