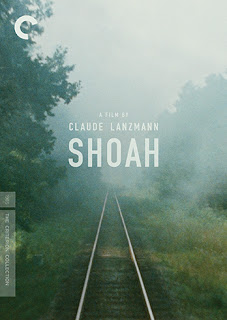 [There are a number of times during Shoah when an interviewee says there are no words to describe their experience. Although it is crude to compare watching a movie to what these people witness in their lives, there are truly no words to describe Shoah. It is both one of the truest representations of cinema and undoubtedly the most harrowing and life-altering film I have ever seen. There is no other film with which to compare it. There is, perhaps, no other film. Some thoughts, messy and honest:]

It took me nearly a month to watch all of Shoah. Part of this is my busy schedule and the film's nearly ten hour running time, but most of it is the need to fully digest and attempt to comprehend each section of the movie. As it moved deeper into its narrative, it became more and more difficult for me to process. There were moments when I stopped paying attention because the emotions were overwhelming. Other sections I rewatched because they were so dense and perspective-altering.

Shoah is a reminder that horror movies are made to understand our deepest fears, while documentaries about horrors are meant to destabilize those same fears. Nightmare on Elm Street is therapy and Irreversible is abuse, but both of these things are comfort, in a way. Shoah is uncertainty in the form of truth. It's the electron knocked out of its orbit, hurtling towards us.

I've never been to Germany, though my last name is German, from a family that emigrated in the 1850s. In some ways, Lanzmann paints a more damning picture of Poland, though his account is extremely controversial and should be balanced by the knowledge of how many Christian Polish people died during the war, often fighting what they knew was a losing battle. But it is Germany that is stained by the Holocaust, and the German people - many of whom had no idea what was going on - who must live with it until there is no longer a Germany. I don't think I could ever go to Germany after having seen Shoah. I don't really think there should be a Germany any more to go to.

Many of the key people Lanzmann interviews in the film are now dead. Lanzmann interviewed them in the 70s, just 30 years after the events they describe. It is horrifying to me that the 70s were just three decades after the Holocaust. It fills me with great sadness to think that the men and women who can tell us first-hand what happened will soon all be gone from this Earth. I want them to have peace, I want the pain to be gone from their eyes. I want them to live forever, though. I don't want anyone else to tell their stories but them.

My maternal grandparents were 20-something American Jews when they found out about the Holocaust. My grandfather fought in Europe, spending time in France and Italy, mostly. I don't know if it matters that you are Jewish - maybe if you had family in Europe that was killed or barely survived like they did it meant more to you. I like to think it didn't, but it's hard to find the kind of impact the Holocaust should have had in American culture in the late 40s. Sometimes it's hard for me to believe there was any culture.

I lived through 9/11, like we all did, only I was a little closer than most and still miles away. I lived just below Canal St. and watched both towers fall. I saw people walking up the streets covered with soot and dust, some with minor injuries that were ripples from the tidal wave that hit the bottom of the island. Rumors swirled of more attacks and we all wondered what could possibly happen next. I say this because we all try to take our own experiences and feel like we can relate to the stories we hear. The fear and confusion I felt that day and in the subsequent weeks is my own, but I am ashamed of it. I have lived a life of privilege. We all have.

Perhaps the most harrowing section of the film is a letter that ends the first half in which problems with the vans that were being used to commit mass murder are laid out in bland bureaucratic prose, referring to the Jews as the "merchandise." It's a chilling inadvertent commentary on any system's ability to normalize the ultimate horrors through political language and mental separation. The letter was written by Walter Rauff, a Nazi whom many consider to be responsible for the murder of 100,000 Jews. He also allegedly worked with Israel after the war as a secret agent meant to foment unrest among the new country's neighboring enemies. When his mission failed, the Israeli secret service helped him escape capture and flee to South America, where he worked with Pinochet and died of lung cancer in the 1980s. This kind of self-serving purposeful dismissal of justice is almost as horrific as the crimes of which Rauff was accused.

Although the bulk of the film's information comes from spoken words, like all pure cinema you don't need the sound to understand the full impact. There are essentially three images in Shoah. The most common is not human, but is instead the scene of the crime, as one understated synopsis put it. The camera winds its way through contemporary Europe, spending most of its time in the overgrown ruins of the camps themselves. Unlike Night and Fog, shot twenty years earlier and whose poetic and haunting exploration of the camps is in no way rendered obsolete by this definitive work, Shoah is shot in a workmanlike manner that dwells on the natural elements of the ruins' surroundings. Lanzmann has no interest in telling you what it was like to be in the camps by showing you this footage. He is binding all of us on Earth to them through common signifiers. It's a constant reminder that this happened, not in a place but to humanity, perhaps if one is inclined in front of God, surrounded by Him. The second image in Shoah is of the complicit, the Polish citizens who stood by and watched and the German SS and bureaucrats who were at best willfully ignorant. Some of these people are unrepentant and soulless, content to rattle off facts as if their testimony absolves them. Most, however, are at war within themselves, desperate to justify their inaction even when it was clearly justified and they really were powerless to help. These people are us, and we must reconcile that knowledge with who we believe we are today. The third image is the survivor, and this is the image one will never forget. The stories in Shoah are unlike any you have heard before, but the look in the eyes of these men and women is indescribable. If there is one feeling they all have, it is guilt. I think most Holocaust survivors would reject being called victims, even though the horrors they went through and must live with are incomprehensible. They are survivors because someone else died in their place and there was nothing they could do about it. They are at their most emotional when they plead with Lanzmann to understand that there was nothing they could do, even if what they did do was more than any of us could have. They do not cry for themselves, but for their families, for strangers.

Lanzmann is a controversial figure, particularly in Poland where the film was denounced as an attack on the Polish people that omitted much of the hardship and tragedy that country suffered at the hands of the Nazis. Certainly, if you only watched the film and knew nothing else of World War II history, the depiction of Warsaw in the final sequence of the film would lead you to believe that things were normal and sunny for the non-Jewish population. Yet Lanzmann's forceful perspective on the Holocaust is essential to his telling of the story. His anger and disgust is present in his interviews with SS members, while his aggression towards the Polish who in some ways benefitted from the deportation of the Jews is evident and sometimes feels illogical and unfair. But without this emotion the film would feel dead and the story would not have nearly as much impact because there would be nothing with which to engage. Telling the story of a grand tragedy without a perspective is an act of cowardice. Lanzmann knew that.

I don't think most people know that the Nazis kept their industrial-scale mass murder of the Jews secret from even high-ranking members of the SS. Many people chose to turn a blind eye, for sure, but there were undoubtedly many who honestly had no idea of what was being done in their name. As explained by the only historian in Shoah, the reason this was so easy to do was that every other thing done to the Jews by the Nazis was old hat in Europe. Basically anything up to the actual "final solution" had been done before, so most Europeans basically said "Here we go again." Perhaps more difficult to conceive of is what he indicates that this means - up until this point, the Nazi bureaucrats did not need to make their personal mark on what they were being asked to do. It was only when they were asked to commit the greatest organized crime against humanity perhaps in history that they needed to think outside the box. Because the secret needed to be kept, nothing could be detailed in communication from the leaders to the field, which meant they were somewhat on their own. The Holocaust was, in essence, a triumph of middle management.

Everyone should see Shoah, but don't ever see Shoah. It's a terrible truth that once it's known you can't forget. It's history made eternally relevant, a social service that is invaluable. It's hopefully something we'll never need, but it's vital to have it on reserve. It's also a living thing, cinema that sinks into you even in its most static, uncinematic moments. Roger Ebert said it shouldn't be judged against other movies and vice versa, and I know exactly what he means. As a film, it would rank with the greatest ever made. But there are no films to rank it with. There is only Shoah.
Posted by bza at 6:39 PM