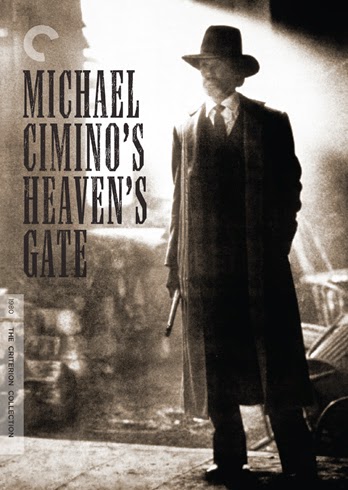 Heaven's Gate is arguably the most notorious Hollywood movie in history, a film that some argue singlehandedly ended the auteurist golden age of the late-60s and 70s. There have been other massive critical and commercial disasters before and since - think films that followed in its footsteps like Waterworld (which actually made money), Cutthroat Island, and Gigli. But a whole book was written about Heaven's Gate and the disaster of its (un)making. An entire career was essentially ruined, as the Oscar-winning director Michael Cimino never recovered, while its studio, United Artists, similarly unraveled. And this isn't even mentioning the New York Times review from Vincent Canby, possibly the most hate-filled, gleefully nasty review in the paper's history (to his credit, Roger Ebert's review isn't exactly the friendliest reception).

This makes the gradual reevaluation of the film that has taken place over the past thirty years (with a real escalation over the past decade) a pretty big surprise. This sort of thing just doesn't happen that often (it did on a smaller scale recently with the (imho) deservedly overlooked John Carter), but it especially doesn't happen with a disaster as massive and high-profile as this. Of course, as I pointed out, there's never really been a disaster as massive and high-profile as this.

So when Criterion announced they would be releasing this nearly four-hour monster, the first question that popped into my head was how much the context informed their selection. Obviously, viewed on its own merits, they deemed the film of a high enough quality to merit a release - Criterion isn't in the business of releasing films they consider failures, regardless of their historical significance. But is this the release of a masterpiece on par with the great films of its era? Or is it a mere call for a reappraisal of an unfairly maligned film, a chance for film lovers to see the movie divorced of its negative history?

After viewing the film, I respect the argument for the former, but I tend to lean towards the latter. I had been curious about the film ever since I read about it in numerous film history books (including the brilliantly trashy Easy Riders Raging Bulls) but had always been daunted by the blistering reviews and intimidating running time. Make no mistake: Heaven's Gate is long. Really long. And it's not fast-paced. Still, with the exception of the opening sequence, which seems somewhat superfluous and is destined to turn many people against the film before it even begins, I have a hard time pointing to any specific scenes I think shouldn't be included. Interestingly, Ebert points to narration about why Kristofferson goes west in his review that isn't there in the full-length version - because it doesn't need to be, as Kristofferson explains his actions in a scene that was apparently cut for the shorter version which received wide release.

This scene, in which Kristofferson speaks to a man at a train station, is also a great example of the sheer scope of Heaven's Gate. It's no wonder this movie became one of the most expensive ever made, as the number of extras alone just milling through the background at the train station in full period clothing (not to mention the massive sets that were built to function as a background for the station - onscreen for probably twenty seconds) is high enough that this scene probably could have financed a whole movie. Extras abound in Heaven's Gate. Either they recycled people for different scenes, or every person who was alive in 1980 is in this movie - in elaborately made costumes. The dance scene during the opening sequence of the film is wholly superfluous and extravagant - at least a hundred people in gowns and suits, dancing and twirling in unison, urged on by a full marching band, almost totally unrelated to the other 150 minutes of the film save for a few characters and a vague thematic connection to civilization's ruling elite.

But measuring this epic prologue next to what comes later helps the film find a balance between the huddled masses and their waiting oppressors. When the focus turns to the immigrants destined to be destroyed, their overblown emotions and indistinguishable faces and characters seem almost backwards. Yet this could quite easily be said about the crucial scene in which Sam Waterston initially lays out the case for killing the farmers, as rich men huddle together and mumble calls of "here here!" It's a reminder that Heaven's Gate is a film about a land teeming with people, ready to explode both geographically and economically. Life was cheap, just as wealth was pre-ordained. One of the film's flaws - its lack of fleshed out characters beyond the four or five key characters - becomes a powerful depiction of the massive vision and prerequisite conditions behind manifest destiny. Both the film's length and massive budget are essential to this significant accomplishment.

Still, Heaven's Gate remains unforgivably bloated. It's loosely edited, saddled with an affected mandolin score, and alternately over-serious and too slick for its own good. Cimino's dialog has too many Hollywood-style quotable exchanges to be realistic, but his characters lack the relatability that is often Hollywood's strength. Kristofferson's character is the film's center, making Heaven's Gate another in the long line of films that has chosen the perspective of a rebellious outcast of the evil oppressors, rather than a true member of the oppressed - this has most notably been taken up recently by the truly execrable The Help. This choice was perhaps inevitable, but it's ultimately the film's downfall. The movie wants to be ambitious and meaningful, but wants to do it within the confines of the system against which it is supposedly rebelling. It makes the journey at the core of the film totally insignificant, not just because our protagonist is already changed but because it guarantees that the film's politics will fall on deaf ears.

This failure is reminiscent of another massive and disappointing 19th-century epic, Martin Scorsese's Gangs of New York. That film's awkward love story seemed jammed into the story Scorsese really wanted to tell - about New York's coming of age and the draft riots during the Civil War - whereas Cimino had the power to make exactly the film he wanted to make (something that ironically cost Scorsese that same luxury two decades later). Still, what Scorsese gained with his limitations was the need for a tight narrative that kept his film focused and constantly churning. Heaven's Gate obviously comes from a different era when films had greater leeway to be lyrical and leisurely paced, but Cimino doesn't use this pace to his advantage as much as he simply takes all the narrative slack he can get.

This might be less of a problem if the film was a visual feast on par with Days of Heaven, but the movie is a bit of a dusty mess. As in Cimino's best film, The Deer Hunter, what's most impressive about the look of the film is what the director has put in front of the camera, rather than where he's put the camera or how he shoots it. I'd be surprised if Cimino intended the movie to be beautiful - everything is dirty, smoke-filled, dark, as if the country was emerging from sleep. This is a tough palette to maintain over four hours, and while it's an impressive accomplishment, I don't think the movie is necessarily better served by it.

I've been taking Heaven's Gate apart for a while here, but I wouldn't call it a bad film. It's just that the chance that its ambition would be fully realized was certainly slim, and what's made it onto the screen confirms how big a gamble this was. As pure entertainment, judging it as a film experience, I think Heaven's Gate is worthy of its Criterion release. But I think that's mainly for its scope and, ironically, its smaller moments that serve as the glue holding together the big weighty plot - the final sequence a few years in the future is a strong example of these well-executed moments. As we move further away from the context around the film's creation and initial reception, I think it will be these two things that keep it relevant and increasingly worthy of the reappraisal this release will afford it.