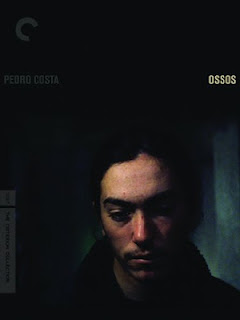 There is an unmistakable distance between the viewer and Ossos.  It permeates every frame of the film, and makes forming a connection with the characters and their world an almost impossible task. This means its difficult to know if I liked or even understood the film: is this distance intentional, or have I placed a separation there that doesn't really exist? Is this a film where style is meant to separate its narrative from the viewer?

Tourist films come in many shapes and colors, but nearly all of them in one way or another attempt to draw you into the world they are depicting. High tourism, which is the category Ossos falls into, is often meant to call attention to the universality of humanity. At the very least, films of this nature bring you into a world you wouldn't otherwise be exposed to: think City of God, Ratcatcher, or Winter's Bone. Ossos certainly appears to be this type of film when it begins, taking us through the Fontainhas, a poor neighborhood in Lisbon. But it quickly becomes apparent through pacing and editing that understanding this world is going to be far more difficult than we had imagined.

This is the first film I've seen by Pedro Costa. It's also the first film in Criterion's boxset of three of the director's films, all focusing on the Fontainhas, and it makes a pretty powerful case for the director as a singular voice. Costa lets his camera sit on faces that don't want to be seen; they try to will away prying eyes with an absence of external emotions. In one scene, the father of an unwanted baby goes to a busy square downtown and begs for help for the baby from passersby. We don't learn much more about him than these people do - in fact, some of the people he asks are given as much attention as he is. Costa is not interested in skewing our perception towards the experience of living in the Fontainhas, of asking for money when you are desperate. He doesn't give us a window into these people's lives, he gives us a wall. Where there is usually translation, Ossos forces us to acknowledge our inability to relate.

Ossos is a slow movie. Not much happens, the editing is loose (understatement), the camera often unmoving. Costa concerns himself with textures and glances rather than motion and interaction. There is probably five minutes of dialog in Ossos's 97-minute running time, and even these conversations are clipped and enigmatic. Combined with the film's distance from both its characters and its viewer, this glacial pace is sure to frustrate most people, just as it would hypnotize countless others.

This might all be to say I don't really know what to think of Ossos. It's certainly unlike any movie I've ever seen before, which could be a good thing but isn't necessarily. It's also beautifully made with clear intentionality. Costa's vision was quite obviously realized. But I can't help but feel like I'm missing something knowable here. Sometimes you think you are lost in a movie, only to get to a certain point and discover you knew what you needed to know all along. Ossos had that feeling to me until it ended and I was left with more questions than answers and a deep sense of frustration in my ability to understand these people, so different from me and presented in a way that is so foreign. Perhaps the most intriguing thing about Costa's trilogy is that Ossos is supposedly the accessible one! If this really is true, I might not know what I'm in for from the last two films.
Posted by bza at 7:49 AM