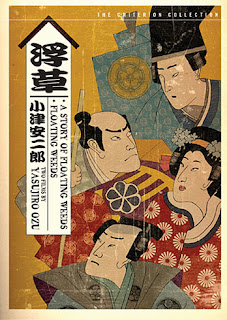 After coming to America, Hitchcock remade his 1934 film The Man Who Knew Too Much in 1956, with Jimmy Stewart in the title role. George Sluizer remade his 1988 masterpiece The Vanishing just five years later because Hollywood wanted an English version with a happy ending. Sam Raimi all but remade his cult hit Evil Dead as its sequel, Evil Dead 2, just so he could have a bigger budget the second time around. Film history is filled with great (and not-so-great) directors remaking films that they had made earlier in their career - almost always with a good reason. For Yasujiro Ozu, that reason is sound.

By 1934, talkies had almost totally overtaken silent film in Hollywood but the medium was slower to die in Japan, and A Story of Floating Weeds became a big hit for Ozu early in his career (he made three more films without sound, two of which are lost). Interestingly, the early film is so effective that - despite the fact that a shift from silent to sound seems like the most drastic adjustment in terms of a remake, almost like book to film - Ozu changed very little when he remade the film a quarter century later. Both movies are extremely moving in the subtle and beautiful way Ozu managed to achieve throughout his career, and it would be hard for me to pick between the two films as to a preference.

The earlier film is most likely more melodramatic. As Donald Richie points out in his essay, Ozu seems more invested in the fates of his characters in the earlier work, while he has resigned himself to observation by the time of the remake. The reason melodrama so often seems overdone and forced is primarily because of its superfluousness in evoking a deep emotional response - something so clearly demonstrated by these two films. A great deal of this is indicated by the way Ozu handles certain scenes - whether he lingers on characters or not, how he chooses his actors and utilizes them, etc. - but much of the contrast lies in the gap between the two cinematic eras. The use of music in particular (and specifically in the climactic scene where the true family dynamic is finally revealed) is a necessity in the earlier film, where music is a constant which must inevitably color the viewer's impression of the story, while Ozu is able to use pauses in dialog and inflection to elicit a response in the remake. This makes for a much more subtle work, but for those who have become accustomed to Ozu's themes and rhythms a much more satisfying one as well.

One of the true pleasures of this journey has been finally understanding the appeal of Ozu. For the modern Western palate he is an acquired taste. But once you begin to understand his intentions, there are few more impressive directors.
Posted by bza at 8:36 AM