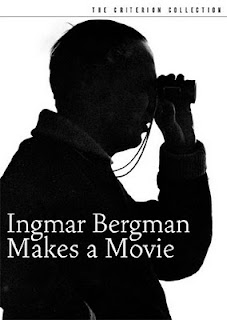 Ingmar Bergman Makes a Movie is certainly not a worthy artifact on its own in the way that The Burden of Dreams is. But taken in the context of Bergman's work - and Winter Light in particular - the film is enormously fascinating and ultimately very rewarding to the Bergman fan. It's not something that would make sense as a standalone product, but in a boxset with the film it's focused on and the surrounding companion pieces it's a great and worthy addition.

The best parts of the documentary are the conversations Bergman and Sjöman have together one on one. Part of the reason for this is that Bergman refused to let Sjöman on set, so the other elements of the film are basically recreations. But the rest of the reason is that the conversations are completely awesome. Bergman feels comfortable enough with Sjöman to be totally honest with him, and Sjöman feels comfortable enough with Berman to offer his own interpretations, which Bergman cannily deflects. It's a fascinating look into the mind of one of the undisputed great filmmakers, one that any person interested in making films should surely watch.

The section which particularly moved me (and excited me) was the final episode, in which Bergman discusses critics and his response to their opinions as an artist. As someone who has been both a critic and an artist who has had their output reviewed, it was an extremely intriguing and beneficial conversation. Bergman and Sjöman raise many of the major concerns I've had on both sides of the artistic spectrum. Obviously, it's simultaneously satisfying and terrifying to know that someone like Bergman - one of the acknowledged masters in cinema - has all of the same insecurities and fears that an average artist of my mediocre caliber has. But it's also inspiring to watch someone as insightful as Bergman reflect on these things and ultimately come to terms with them.

Ultimately, Ingmar Bergman Makes a Movie is not worth watching for anyone who doesn't appreciate the trilogy with which it is packaged. However, for people like me who loved Winter Light in particular, it's an invaluable resource for insight into the filmmaking process, one for which I am grateful to Vilgot Sjöman for making the effort to document a crucial moment in film history.
Posted by bza at 6:03 PM