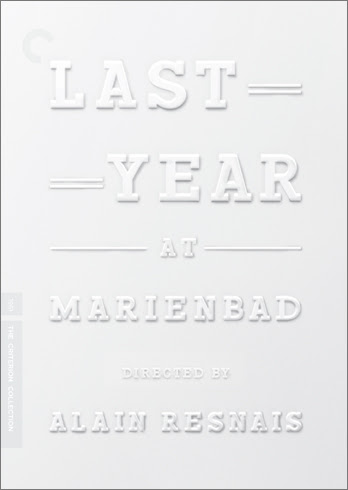 There are so many things about this movie, I'm not even sure where to begin.

First of all, how has this movie flown so far under the radar? Night and Fog and Hiroshima, Mon Amour have always been discussed as Resnais's most high-profile and successful works. I saw the latter when I was in middle school, far too young to comprehend the film's strange narrative structure and poetic tone, but I never heard about Last Year at Marienbad until about a year ago when I saw it had been released on Criterion. In fact, until I sat down to watch it, I was under the impression that it was a Hollywood melodrama (doesn't it sound like one?).

Thank God I didn't know more earlier, because I can't even imagine what I would have made of this film in my teens. Last Year at Marienbad is not just a French film, but the French-iest film ever. This is the movie that people parody when they make fun of French films, of student films, of arthouse films, of any movies that would be considered pretentious. There are many movies that have been made that have the same feeling as movies that are parodies of this style. L'Avventura and Pierrot Le Fou come to mind immediately. But unlike those films, Last Year at Marienbad doesn't just project this feeling, it is almost literally the same as the parodies it inspired.

The film is basically about a man meeting a woman at a hotel and trying to convince her that they shared the beginnings of an affair a year ago and they had made plans to return to the same hotel one year later to consummate that affair. But that is like saying Ulysses is about a dude hanging out one day in Dublin. What really happens in Last Year at Marienbad in narrative terms is entirely up for debate and personal interpretation. The film is so oblique as to be deliriously frustrating, the acting is so stilted, the blocking so posed, and the scene connections so disjointed - and yet brilliantly fluid - as to consistently take the viewer out of the moment. It's as if the director is constantly trying to persuade the viewer that they are watching a film.

It would be fiendish enough to present the viewer with a puzzle that is ultimately solvable, as in, say, Diabolique. But Last Year at Marienbad not only refuses to provide answers, but strongly hints at the idea that major pieces are missing, and some of the pieces that are there might not actually belong to the same puzzle. By the end of the film, it's not entirely clear who is lying to whom, or even if any of this is actually taking place.

This non-linear challenge wasn't even finished by the filmmakers themselves, because perhaps the most difficult thing about Last Year at Marienbad is one that was not an issue when the film was released: getting over the parodies of its tone and style which followed. The first half hour of this movie is going to be unbearable for 99% of viewers, simply because it is that difficult to overcome years of conditioning to either laugh at the self-seriousness of the film or dismiss it as intellectually vapid, a pretentious cinematic exercise disguised as a deep and meaningful exploration of the human condition. By the time the shock of the film's tone wears off, the viewer must endure the further shock that Resnais plans to sustain the tone and winding narrative structure through to the end of its ninety minutes. This is all to say that watching Last Year at Marienbad is perhaps as much of a challenge as experiencing or understanding Last Year at Marienbad.

I've probably made anyone who has gotten this far think that the movie is a crushing bore wrapped in a torturous labyrinth of bullshit. But in reality, Last Year at Marienbad is one of the most invigorating films I've ever seen. Resnais's camerawork is inspired and beautiful - on blu-ray, this movie almost literally glows. Every shot is breathtaking, and the style is so hypnotic that in those very deliberate moments when some pattern is broken - a woman trips, a shot rings out, a flat background becomes three dimensional, a fluid dance scene is cut with flashes of an austere hotel room quickly and even quicker - you can almost feel the tension released. It truly is form replacing narrative in every sense.

It might be considered funny, btw, that a man who established himself as a documentary filmmaker would be so insistent upon rejecting conventional narrative in his fictional movies, but I kind of think it's appropriate. Our lives don't unfold as stories, really. There are always the untold connections, the brief moments, and the unopened doors that go unmentioned. While narrative cinema is undoubtedly the most effective way to mimic the way in which we process information, why shouldn't non-narrative cinema be just as representative of reality itself?

Beyond this technical and structural discussion, of course, is the story of the film itself. Having only seen the movie once (I plan on seeing it again three or four hundred times before I can really come to a strong conclusion), my initial impression was that the man is dead and that he was trying to convince the woman that she is also dead, and she must join them on the other side. Now, I don't at all think this is accurate, and I think I assumed this largely because the film owes a great deal to Hitchcock (especially Vertigo) and so clearly influenced Kubrick when he was making The Shining. But part of the fun of the film is that your theories don't have to be right to be compelling. The film is so open-ended that interpretations are meant to be part of the experience (another thing which ties the movie in so closely to the art of filmmaking itself).

Last Year at Marienbad is a challenging film, and it would be very easy to dismiss it as a failed experiment. In fact, I think much of the reason it doesn't have the higher profile of even a mid-level (on a level of fame) New Wave classic like Hiroshima, Mon Amour is that the film's quality and value remain controversial to this day (it was received poorly by a large number of critics, including the sycophantic and annoying Pauline Kael). Most people will hate this movie, not just because we aren't used to seeing films unfold in this way, but because they simply aren't interested in trying to adjust their perspective. But I could also see a small percentage of people not just falling in love with the movie, but considering it to be the greatest film they had ever seen. It has many of the necessary elements for this status, not the least of which is an astonishing technical confidence that oozes a love for cinema at its most appealingly manipulative. While I wouldn't go to such extremes, I lean towards this latter group, not because I am generally partial to films of this nature, but because I was deeply affected by the experience of watching it for the first time, and a week after seeing it I can't get it out of my head.
Posted by bza at 12:07 PM