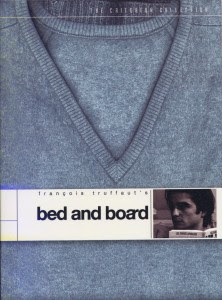 The fourth installment in the Antoine Doinel series, Bed and Board is not as immediately satisfying as Stolen Kisses, but it's by no means disappointing. Part of the problem is that the movie contains a lot more conflict than its predecessor, but it's still an overall light and entertaining experience. Some characters are even around exclusively for comedic effect, like the friend who keeps borrowing money from Doinel, or the waitress who is constantly trying to hit on him (which, oddly enough, reminded me of the maid in Billy Madison). The most obvious, however, is M. Hulot, who randomly appears on a train platform towards the end of the movie, and then disappears equally fast. Truffaut apparently wanted to pay tribute to Tati and devised this cameo as a way of doing so.

Bed and Board is really just about young married life, though. The experience of growing familiar with someone and how that familiarity is tied into your love and affection for them. While I somewhat relate to this moment in life, having just tied the knot myself, I can happily say that the conflict that occurs in the film is something I plan on avoiding. It is interesting, however, how Antoine tells Christine when he is caught having an affair with a Japanese woman that he could understand her being upset if it was another woman, but this woman represents "another world." Of course, Antoine soon grows tired of that world and longs for the familiarity of Christine, confirming the thesis at the core of the film that moments of newness and excitement cannot compare to the pleasures of everyday happy life, like throwing your wife's coat and hat down the stairs of your apartment building to convince her to get out the door faster. That's when you know you're really married, and, depending on your point of view, really happy.
Posted by bza at 10:19 AM